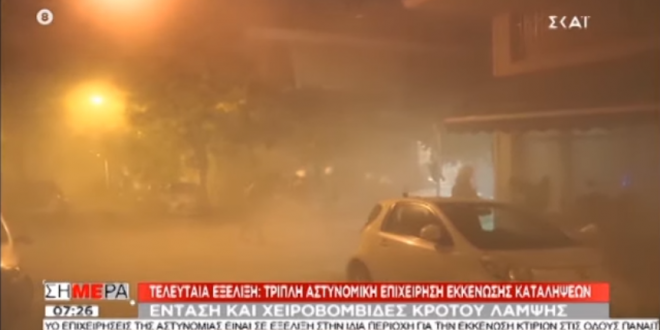 Tension, tear gas, flash grenades: this was the cocktail being served up in the central Athens district of Koukaki on Wednesday morning, as police launched a three-pronged operation to clear three squatted buildings in the area.

When the squatters defied police orders to vacate the buildings, police fired flash grenades and tear gas as the occupants hurled fire extinguishers and furniture at them.

“We will die here,” someone inside the building is reported to have shouted.

Police broke through locks to enter the buildings, where they arrested those inside before taking them to Attica police HQ.

The police operation, which involved officers from three different units, began before 6am at addresses at 45 Matrouzou St., 21 Panetoliou St and 3 Arvali St in Koukaki.

On Matrouzou Street, squatters climbed onto the roof and threw stones and smoke at police officers, who responded to a flash of light. The situation is similar in the building of Panetoliou Street, where the squatters also shouted slogans.

The police are planning to clear all squatted buildings after a 15-day deadline set by Citizen Protection Minister Michalis Chrisochoidis expired earlier this month.

During the raid on one of the buildings, police reportedly stepped on to the rooftop of a neighbouring building. Hearing footsteps, the residents of that building went to see what was going on. When they asked the police if they had a warrant, they were handcuffed and put on the ground. The mother of one of the men told reporters that she saw police pressing her son’s head to the ground. Both the son and his father were among those arrested.