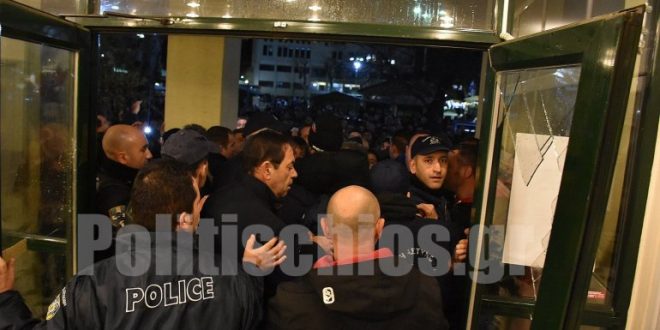 Serious incidents erupted in the town hall of the island of Chios on Monday night, where Deputy Minister of Labor, Notis Mitarakis was booed and became the target of protesters angry over the government’s migration policy and the creation of a new structure for refugees and migrants.

A group of protesters had gathered outside the town hall and started to boo and fire insults when the deputy minister arrived. Mitarakis was helped by to seek refugee inside the hall.

The protesters finally broke the door outside and entered the building. Some of them reportedly threw water bottles and coffee cups at the minister.

Police detianed two of the protesters, one of them was arrested.

The City Council of Chios had met to discuss the developments regarding the establishment of a closed hot spot facility on the island.

After tension settled, the City Council focused on the crucial issue and unanimously rejected the governmental plan for the new closed accommodation structure for refugees and migrants, following a marathon metting that lasted until midnight.

The structure is supposed to be located at the 15th kilometer of Chios-Volissos Provincial Road, following a marathon meeting that ended at midnight.

The City Council also rejected Mitarakis’ proposal to grant municipal land at the Aipos Mt for the construction of the structure. In his report, the deputy minister who is also an MP elected on Chios, set as precondition for the closure of the current VIAL hot spot, “the creation of the new structure as the only way for a viable solution.”

With its decision, the City Council of Chios insists on its initial decision to create a structure for just 500 people – and not up to 4,000 as the government plans.

The new structure has also angered the local church that claims that the plot belong to its property.

Further, the City Council decided to join the protests on east Aegean islands scheduled for January 22-23, 2020. Local authorities and residents will launch a general strike on the islands affected by the migration problem. it is worth noting that the mayors on the five east Aegean islands as well as the regional governor were elected on the ruling New Democracy ticket.