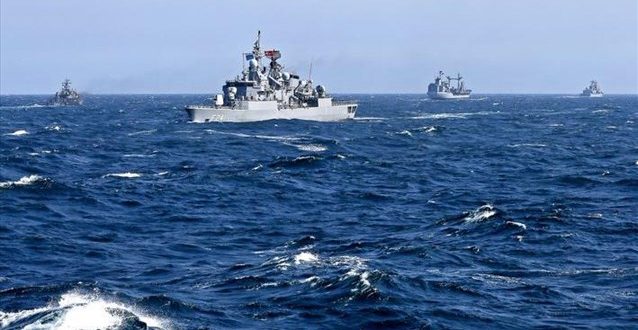 Turkey escalates tension with Greece with five claims in the Aegean

Turkey escalates tension with neighboring country and NATO partner Greece and asserts its long-standing claims in the Aegean Sea challenging the Greek sovereignty of several mostly uninhabited islands, the continental shelf and the territorial waters.

Just hours after Defense Minister Hulusi Akar demanded demilitarization of 16 Greek islands, a high-ranking official of the Turkish Foreign Ministry put on the table the whole list of Ankara’s claims that mark the foreign policy of Turkey towards Greece.

“The Aegean is a common sea between Turkey and Greece. The freedoms of the high seas and the air space above it, which at present both coastal States as well as third countries enjoy, should not be impaired. Any acquisition of new maritime areas should be based on mutual consent and should be fair and equitable,” the Turkish Foreign Ministry notes.

“The fundamental source of tension between Turkey and Greece is the Greek perception to regard the entire Aegean as a Greek sea in total disregard of Turkey’s rights and interests as one of the coastal states,” it adds.

“The threat of extending Greek territorial waters beyond their present width of 6 miles ( Greece extended her territorial waters from 3 miles to 6 miles in 1936, Turkey followed suit in 1964), the remilitarization of the Eastern Aegean Islands placed under demilitarized status by virtue of the very agreements ceding them to Greece, a 10 mile “national air space” over territorial waters of 6, abuse of the FIR service responsibility as if it confers sovereignty (request of flight plans from state aircraft and allegations of “violations of” Athens FIR) can be counted among the issues which are the real underlying causes of the Turco-Greek conflict in the Aegean.”

The Aegean continental shelf constitutes a dispute between Turkey and Greece in the absence of a delimitation agreement affected between the two countries.

The Continental Shelf dispute is but one essential element among the outstanding differences. It has a bearing on the overall equilibrium of rights and interests in the Aegean. The dispute concerns the areas of continental shelf to be attributed to Turkey and Greece beyond the 6 mile territorial sea in the Aegean

Another vital element of the delicate balance of rights and interests in the Aegean sea is the breadth of the territorial waters. Under the present 6 mile limit, Greek territorial sea comprises approximately 43.5 percent of the Aegean sea. For Turkey the same percentage is 7.5 percent. The remaining 49 percent is high seas.

If the breadth of Greek territorial waters is extended to 12 miles [International Law of the Sea signed by Greece but not by Turkey] due to the existence of the islands, Greece would acquire approximately 71.5 percent of the Aegean sea, while Turkey’s share would increase to only 8.8 percent. The Aegean high seas would diminish to 19.7 percent.

Any increase beyond 6 miles is totally unacceptable to Turkey.

Half of the Aegean airspace is international airspace. The two littoral states, Greece and Turkey, have freely used this area under the provisions and procedures of international law.

The demilitarization of the Eastern Aegean Islands was due to the overriding importance of these islands for Turkey’s security.

Greece has been violating the status of the Eastern Aegean Islands by militarizing them since the 1960’s in contravention of her contractual obligations.

There are numerous small islets and rocks in the Aegean ownership of which is not determined by international treaties. Most of those features can not sustain human habitation and have no economic life of their own. Greece has attempted to change their status by opening some of those geographical features to artificial settlement. To this end, Greece has enacted laws and regulations that have no bearing from the point of international law. Turkey regards this new Greek policy as another attempt to establish “fait accomplis” with a view to close-off the Aegean Sea as a Greek lake.

PS With such claims, Turkey and Greece will never agree on any solution to solve any dispute. The “pillars” of the Turkish foreign policy in the Aegean are not new and reflect a consolidated state policy. However, the tension escalates every day.

The question is how far Erdogan would dare to go in order to create a new fait accomplis in the area after Turkish previous governments managed to create “grey zones (disputed zones) in the Aegean on the purposeful occasion of the Imia Crisis in 1996.