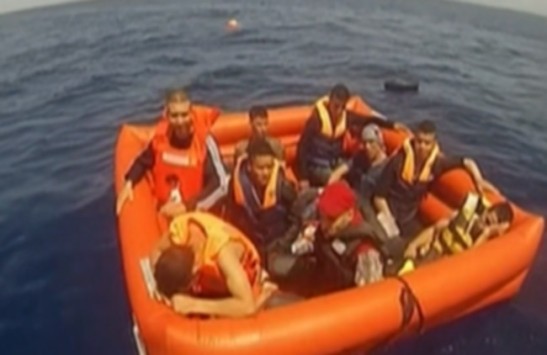 Greece and Italy will keep carrying the whole burden of migration should the European Union approve the German asylum reform plan that wants asylum-seekers to be stuck for a long period of time in the countries considered as “EU’s external borders.” On Friday, the German coalition government partners have agree to a plan to reform the European asylum policy. Berlin will propose the plan to EU once it assumes the rotating EU Presidency in the second half of 2020.

Among others, the plan foresees the “preliminary examination” of asylum applications in the countries of entry. This will quickly determine whether a refugee or immigrant has realistic prospects of being recognized as a politically persecuted or refugee.

In the event of a positive preliminary examination, the asylum-seeker should be allocated to the Member States of the European Union in a fair process. This so-called “fair distribution” principle will be based on the population and economic power of individual countries.

It is noted that under the Dublin system currently in force, the asylum seeker must submit his application to the first country of the European Union in which he was registered. That is why countries at the external borders, such as Greece and Italy, are particularly burdened, dpa notes..

The German plan also provides that social benefits for asylum seekers will be provided exclusively to the EU country responsible for the asylum procedure. This is intended to limit so-called secondary migration, ie the uncontrolled movement of asylum seekers from one EU member to another. It will thus no longer be possible to have substantially examine the application in another Member State.

This is only a short summary of the Seehofer’s plan he initially presented to his EU counterparts in Ocotber 2019.

Apart from the social benefits provision, what is new in the German plan in contrast to Dublin Regulation? Fairly nothing: Asylum applications will be submitted in the first country of entry, approved or rejected asylum-seekers will be stuck there as it happens since 2016.

To implement these proposals, German Interior Minister Horst Seehofer (CSU) said that he  intends to continue “doing everything possible so that we can finally move forward and put an end to the stagnation of immigration policy.”

How would he manage to ‘enforce’ EU member states to participate in the “fair distribution” of asylum seekers after the “preliminary examination” of their application has been approved? With the famous, many times announced but never implement  “sanctions” with which the EU wanted to punish members like Hungary, Poland and the Czech Republic that refuse to take asylum-seekers?

How will he do it?

That’s mission impossible, the practice of the last couple of years after the EU-Turkey agreement in 2016 has shown.

No wonder Greece is preparing “closed centers” on the islands with capacity of over 7,000 people each, as the asylum seekers will have to stay in the country for what? at least six months? until the “preliminary examination” has been reached. Should this fail, the “migrants” will remain in the closed centers until they are deported.

Greece would fall victim of bad advise if it approves such a plan.

Anyway, the new EU Interior Commissioner Ylva Johansson is reportedly preparing a new proposal for the asylum reform and she plans to submit it by the end of February or March.