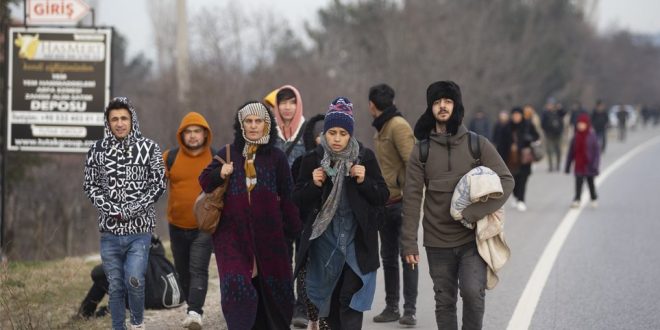 Greece has maximized border controls at land and sea borders with Turkey after Erdogan opened the gates for refugees and migrants to go to Greece and “Europe.” Armed Forces and Coast guard are on alert, the chief of General Staff is heading to Evros and the islands of the North Aegean Sea.

“Greece has tightened sea and land borders with Turkey. After developments in Idlib, it is in constant contact with the European Union and the NATO on the issue,” government sources told media on Friday.

An emergency meeting on the issue is currently being held at the Greek Defense Ministry. It has been decided that  the Chief of General Staff will head to the area of Evros, the land border with Turkey, and the islands of the North Aegean Sea, state broadcaster ERT TV reported.

Border patrols are to be increased.

The Shipping Minister is on his way to the island of Lesvos, even if his visit was planned before Ankara opened its gates for refugees and migrants.

According to media information, Greek Armed Forces and Coast Guard are on alert.

Following a deadly attack in Idlib, where 33 Turkish soldiers were killed and dozens injured, Ankara said Thursday night that it would no longer stop Syrian refugees from reaching Europe.

Turkish media and social media have been flooded with footage showing refugees and migrants walking towards Greece.

The first immigrants to leave Turkey for Europe.

Turkish authorities do not block anyone from leaving.

All immigrants are free to go as can be seen in the video.#syria #turkey #immigrants pic.twitter.com/sUAy5a5spQ

WATCH: Refugees going to GREECE from #Turkey as Turkish authorities opened the borders into Europe without any explanation. pic.twitter.com/0AxRpgAZbO

So far, no refugees or migrants have massively entered Greece through the land borders, media report. One boat arrived on Lesvos and one on Samos on Friday morning.