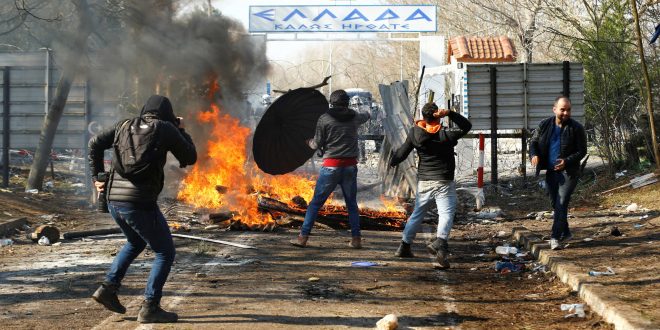 Greece has decided to suspend asylum for a month and to activate a series of EU and Frontext mechanisms to protect her land and sea borders, while thousands of migrants are pushing their way to the country in Evros and the Aegean islands.

“Turkey has become a trafficker itself,” government spokesman Stelios Petsas said on Sunday evening, following an extraordinary meeting of the Government Council for Foreign Affairs and Defense (KYSEA) that has decided a series of measures to deal with the dramatic migration crisis.

“In recent days, Greece has been receiving sudden, massive, organized and coordinated pressure from population movements to its eastern, land and sea borders,” Petsas said.

“This movement is directed and encouraged by Turkey. These actions are in breach of the obligations arising from the European Union – Turkey Joint Declaration. Instead of limiting the rings of migrant and refugee traffickers, Turkey has become itself a trafficker,”said he added.

He stressed that “the masses of people are forcibly attempting to enter Greek territory, despite the fact that it has been made clear by the Greek side, that no transit is permitted in any way.”

“Due to its coordinated and massive nature, this movement has nothing to do with international asylum law which concerns only individual cases. Under these circumstances, the present situation constitutes an active, serious, exceptional and disproportionate threat to national security of the country.

The concentrated individuals are used as pawns by Turkey to exert diplomatic pressure. Greece unequivocally exercises its sovereign right and its constitutional obligation to safeguard its integrity.”

For these reasons, the KYSEA decided the following:

1. Upgrading of security measures to the maximum at the eastern, land and sea borders of the country by security and armed forces to prevent illegal entry into the country.

2. Temporary suspension, for one (1) month from the date of this decision, of the lodging of asylum applications by those entering the country illegally.

3. The immediate return, where possible, to the country of origin of those without registration who enter the Greek territory illegally. .

4. Submit a request to FRONTEX for the development of the “Rapid Border Intervention Teams” (RABIT) with a view to guarding the country’s external borders, which also constitute the European Union’s borders.

5. Immediate notification of this Decision to the Council of Ministers of Foreign Affairs of the European Union and the initiation of the procedure referred to in Article 78 (3) of the Treaty on European Union to take provisional measures in favor of the Hellenic Republic in response to a sudden emergency influx of third-country nationals in the context of solidarity between the Member States of the European Union.

Support for Greek efforts to protect the European borders. Closely monitoring the situation on the ground.

I will be visiting the Greek-Turkish border on Tuesday with @PrimeministerGR Mitsotakis.

The borders of Greece are the external borders of Europe. We will protect them. I will be visiting the #Evros land border with Turkey along with Charles Michel @eucopresident on Tuesday.
Once more, do not attempt to enter Greece illegally – you will be turned back.
🇬🇷🇪🇺

Groups of angry migrants staged again on Sunday several organized attempts to cross into Greece throwing stones, wood sticks, tires set on fire. One policeman was injured in the face form a stone thrown from the other side.The border area of Evros resembles a war-zone.

At the same time, more than 500 people arrived today on the islands of the Eastern Aegean Sea.