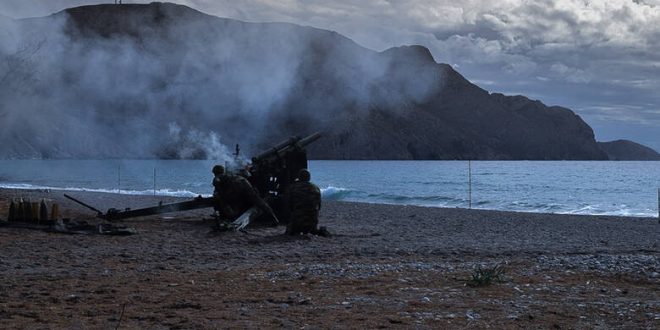 Military exercises using live fire will be held in sea areas to the East, including east of the Eastern Aegean islands, between the island of Samothrace and that of Megisti (Kastelorizo).

Shots will be carried out with live fire by light and heavy armaments with straight-line trajectory, in sea regions east of the islands of the Eastern Aegean, from the island of Samothrace to Megisti,” a Greek Army statement said.

The military exercise will last 24 hours.

Details and danger zones will be announced by local military commands.

Training exercises with live ammunition took place from all outposts along the Evros region, where thousands of migrants and refugees have amassed, on Monday.

The Fourth Army Corps said in a statement late on Sunday that that the military exercise would talk place with rifles, machine guns, guns etc for 24 hours.

The exercises were expanded also to the islands, including Kastelorizo in the South-East Aegean Sea.

Following the emergency meeting of the National Foreign Affairs and Defense Council (KYSEA) on Sunday afternoon, both the Army and the Special Forces  were reportedly commanded to reinforce existing surveillance forces at the Greek-Turkish border and to increase the number of its troops, in Evros as well as on the islands.

The goal of the Greek Armed Forces is reportedly to seal Evros. For this reason, patrols are enhanced 24 hours a day with thermal cameras while helicopters fly day and night controlling the entire border.