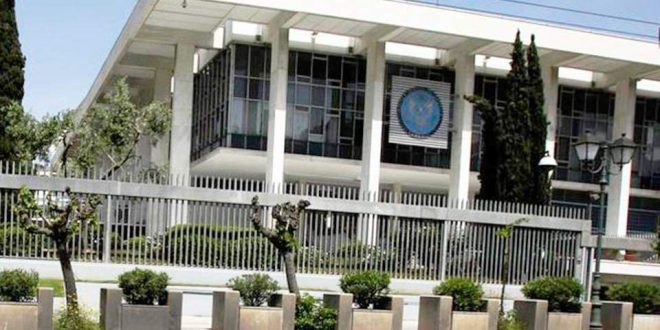 The US Embassy in Athens has issued a Security Alert on Wednesday over the new migration crisis. The Embassy highlights as locations where US citizens should be on alert the islands of Lesvos, Chios and Samos as well as the Evros land border.

Particularly about Lesvos and the Evros region, the communique speaks of “roadblocks and protests, including some violent clashes.”

The Embassy notes, it “has received reports of violence against U.S. citizens attempting to travel in Lesvos.”

Event:  Large numbers of migrants and refugees are gathered at multiple locations along the Greek-Turkish border.  Roadblocks and protests—including some violent clashes—have broken out and continue to occur on the island of Lesvos and the land border in the Evros region. The Embassy has received reports of violence against U.S. citizens attempting to travel in Lesvos.

The Embassy is in contact with the local authorities regarding the safety and security of U.S. citizens in these locations. At this time, there are no changes to the travel policy for U.S. government personnel or to consular services.

KTG Note: over the weekend, Lesvos residents attacked reporters of German media, injuring one of them, during coverage of the arrival of a migrant boat.

Raging against NGO’s helping refugees, migrants and asylum seekers, locals set two warehouses of NGOs on fire on Lesvos and Chios, and a migrants hosting facility that had closed end of January.

The crew of an NGO vessels was  reportedly denied access to fuel on Lesvos.

In Evros region apart form the clashes between Greek security forces and migrants, local residents assist the Greek Army and Police to prevent illegal border crossing. They often patrol in the area.