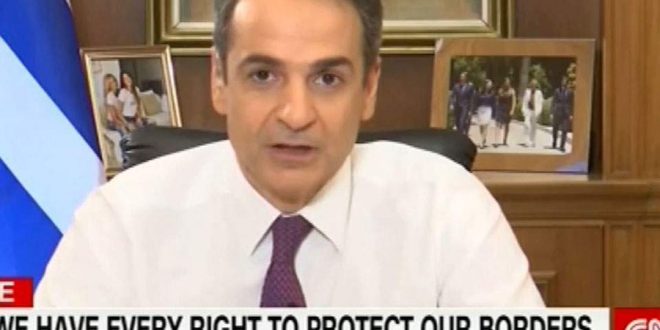 Mitsotakis: EU-Turkey Agreement is dead because of Ankara

“Right now, let’s be honest, the agreement is dead,” Prime Minister Kyriakos Mitsotakis said in an interview with CNN released late on Friday.

“And it’s dead because Turkey has decided to completely violate the agreement because of what happened in Syria,” he added.

“Europe is not going to be blackmailed by Turkey. We are not the ones escalating this conflict, but we have every right to protect our sovereign borders. And we will continue to do so,” Mitsotakis underlined.

“Actions speak louder than words,” government spokesman Stelios Petsas said on Saturday in an interview with Open TV commenting on Turkey’s decision not to allow migrants to cross the Aegean sea.

“Greece has Europe on its side. Greece must protect its borders. We are not blackmailed from Turkey or anyone else. Therefore it is in Turkey’s interest to change its own stance,” Petsas said.

Stressing the need for revision of the Dublin Regulation and the EU-Turkey Agreement, the government spokesman stated: “A diplomatic marathon has already been announced in the coming days and we are waiting to see how it develops. On Monday, the prime minister will meet with German Chancellor Angela Merkel and on Tuesday with Austrian Chancellor Sebastian Kurz. Regarding refugee-migration, we are on the same grounds with Germany in order to proceed with a Dublin 4 review in August, not now, which will definitely have a burden sharing mechanism.”