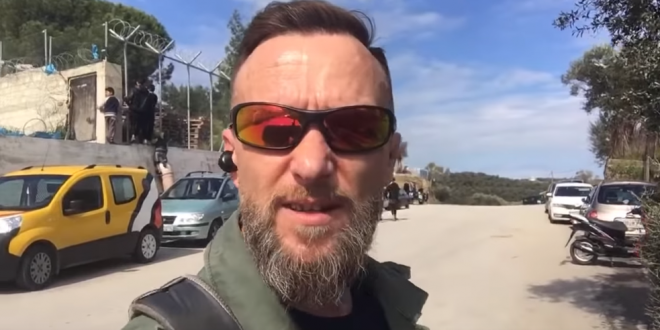 Another foreign far-right agitator who sought to “live his (racist) myth” in Greece has been attacked by suspected antifascists on the Aegean island of Lesvos.

Irishman Rowan Croft – who styles himself Grand Torino – was attacked by antifascists on the street during a live YouTube broadcast on Thursday evening.

Tan Turd Rowan Croft been shown what Greece anti-fascists think of him and his ilk…✊🏽✊🏽✊🏽🤣🤣🤣 pic.twitter.com/gI1BsKAr1v

It appears that Croft, who has done a number of such YouTube broadcasts since publicly announcing his arrival in Greece in Monday, was recognised by his assailants while on air.

His presence in Greece follows the arrival of members of the German Identitäre movement and other assorted fascists, who have sought to take advantage of the refugee and migrant crisis on the border. Similarly, their presence also provoked locals.

As Croft explained in subsequent video broadcast, he suffered only minor scratches and a bruised ear in the incident, which he claimed to have reported to local police. Local press report that he did not press charges.

A former British soldier and self-proclaimed “explosives expert”, Croft is mocked as “Tan Torino” by his many adversaries in Ireland, in reference to the notorious Black and Tans, a British paramilitary unit deployed to terrorise Ireland during the war of independence from 1919 to 1921.

Opponents of the 49-year-old failed builder decry him a “grifter” who seeks to earn a living from monetising racist and homophobic-infused rhetoric on his YouTube channel.

In the broadcast after the street altercation, the self-styled “Irish patriot” struggled to pronounce the name of a supporter because it was in Irish, the native language of Ireland.

Last summer 2019 in Ireland, Croft was “milkshaked” during another live broadcast right after claiming that he had no problem with arson attacks on buildings designated for use by asylum seekers.

One of Ireland’s far right provocateur’s just got milk shaked in Carrick-On-Shannon at the very moment he was saying he had no problems with arson attacks on refugee hostels. He’s a Youtuber known as Tan Torino because he joined the British army in the 1990’s. pic.twitter.com/CGkuC9Y0N4

In the recent Irish general election, the various parties and individuals that comprise the Irish far-right performed miserably, confirming that they are wholly unrepresentative of and unpopular with the Irish people.