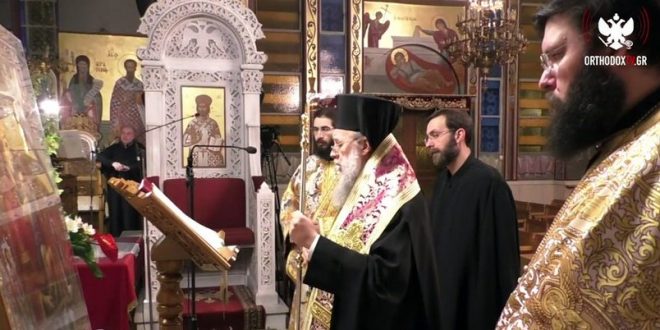 Bishop arrested for holding a mass with faithful despite lockdown

March 21, 2020 CORONAVIRUS Comments Off on Bishop arrested for holding a mass with faithful despite lockdown 3,589 Views

The Bishop of Kythera Seraphim was arrested on Saturday for having opened a church and held a mass in presence of a crowd of people, despite a relevant ban and other lockdown measures imposed by the Greek government to contain the spread. The Bishop had expressed his objection to the ban from the very beginning.

The Bishop held the 3. Liturgy for Virgin Mary on Friday evening, had the bells toll inviting the faithful whom he allowed  attend the mass as well. Not many went to the small church, however, but there were still more than 10 people crowding in the building.

According to the imposed restrictions, the Bishop must have violated at least three measures: the one forbidding churches to open to the faithful, the one forbidding groups consisting more than 10 persons and the one for exposing people,  especially elderly, to the risk of the disease. More likely, the faithful did not held the distance of 2 meters to each other as well.

He also opened the church on Saturday morning and again people attended the mass.

As authorities wanted to avoid tension in front of the faithful, a police officer visited the Bishop and told him to pay a visit to police station.

Indeed the Bishop went to police and claimed that no circular by Archbishop Ieronymus had reached him telling him to follow the ban.

He reportedly said that he opened three churches with chanters and the faithful as a “testimony of faith.”

He was arrested, a file against him has been prepared and he was set free.

The Bishop’s move that challenged the Law and the virus triggered an outrage also among the local authorities with the Mayor of Kythera, Stratos Harhalakis, saying “No one is above the law.”

Next time the Bishop will be caught to violate the laws will be tried according to the Law of flagrante delicto, that is in 48-hours after committing an offense, authorities let him know.

Some wonder if other Bishops who opposed the ban on churches operation will follow his example, especially as the  Annunciation to the Virgin Mary (March 25) nears and the Greek Orthodox Easter (April 12) is not far.

On social media, Greeks criticized the government of double standards noting that “a hairdresser, a cafe or a kafeneio owner in a village gets a hefty fine and a prison sentence” for violating the lockdown measures, but a Bishop walks free.