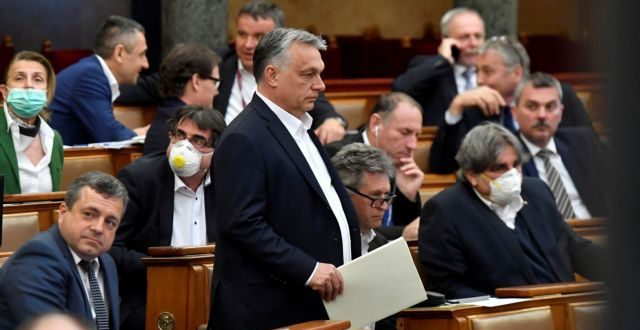 Greek Prime Minister Kyriakos Mitsotaksi is one of the twelve conservative EU leaders favoring the expulsion of Hungary’s Prime Minister Viktor Orban and his party Fidesz from the European People’s Party (EPP).

In a letter to EPP president Donald Tusk, signed among others also by Norwegian PM Erna Solberg and other leaders of the European Center Right Mitsotakis demands the expulsion of Fidesz party.

The letter highlights concerns over legislation passed by the Hungarian Parliament on 30 March that allows the Hungarian government to extend the state of emergency indefinitely, while allowing PM Orban to rule by decrees.

“This is a clear violation of the founding principles of liberal democracy and European values. The fight against covid-19 requires extensive measures, but the virus cannot be used as a pretext to extend the state of emergency indefinitely, “the letter said.

The Danish Conservative People’s party has also called for the the expulsion of Hungary’s ruling party.

“For too long we have watched the democratic decline in Budapest!,” MEP Pernille Weiss tweeted. The party has sent a letter to EPP president Donald Tusk. Fidesz is suspended in EPP, but a decision on its membership was delayed earlier this year.

Tusk also called the extension of the state of emergency during the coronavirus crisis as “politically dangerous and morally unacceptable.”

Tusk wrote in his letter to EPP members that they should “rethink” their stance on Orbán’s party, Fidesz, which belongs to the EPP, but is currently voluntarily suspended.

“Many of you, even if you criticized PM Orbán for his previous decisions, did not agree to expel Fidesz from our political family,” Tusk wrote.

According to EPP leader, even though the priority is to fight the Coronavirus outbreak “the time will soon come, when you will have to again re-consider your positions”.

The former European Council president said the crisis should not be used as an excuse for state overreach.

“The state of emergency, or the state of danger, must serve the governments in their fight against the virus, and not strengthen their power over the citizens,” wrote Tusk.