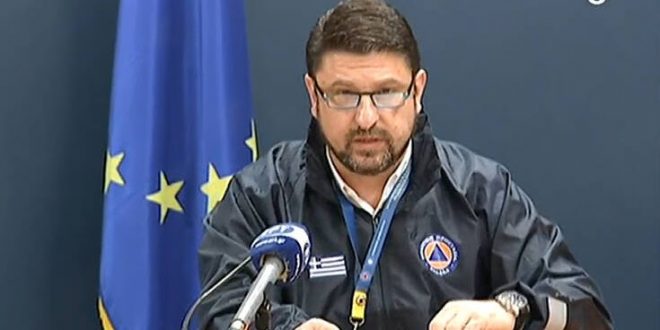 Greece’s Civil Protection announced on Wednesday a series of stringent controls at the main exits of Athens and other cities and suspended inter-island travel with a few exceptions. In an effort to contain the spread of coronavirus, authorities will intensify lockdown checks at highways and toll stations, ports and airports, trains and long-distance bus stations to hinder a mass exodus over the Easter holidays.

The measures go into effect at 06:00 p.m. Wednesday, April 8, 2020, head of Civil protection Nikos Hardalias said during the daily briefing.

All measures will be in effect to April 27, until further notice, and will be enforced on a 24-hour basis, he stressed.

Islanders especially residents of small islands will be allowed to move to islands of the same municipality and only for health & pharmacy reasons (B1), for purchasing supplies in supermarkets (B2) or go to the bank if online service not possible (B3).

It should be noted that especially small islands with no confirmed cases of coronavirus had asked the government in Athens to halt traffic between the islands fearing ‘import” of the virus.

Highway and ring roads checks will be intensified as of 06:00 p.m. Wednesday, April 8, 2020. Controls especially of private vehicles will be 24/7.

Fines for those abusing the “permanent residence” issue and try to travel for leisure purposes (for example for visiting summer houses) will increase from €150  currently to €300, licenses plates will be removed for 60 days and the vehicle will be sent back. they will be fined for “unnecessary movement” even if they move in the prefecture of their residence.

“Anyone who tries to get around the lockdown restrictions and goes through tolls, roads leading to the national highways and main roads in and out of cities, will be turned back, their car plates removed for 60 days and a fine of 300 euros imposed,” Hardalias said.

Checks will be carried out also at ports and airports, train stations and KTEL intercity/long-distance bus stations. Only permanent residents who can confirm this with the necessary documents will be allowed to travel. it will be a one-way travel as they will remain there until the lockdown is lifted.

Exempted are members of the Armed and Security Forces, health workers, members of the Civil Protection and  technical staff of crucial infrastructures of the state, provided that they can confirm and verify the reason for their movement.

Employers who grant work permits to people who are not gainfully employed will be fined 10,500 per person, and the person carrying the license will be criminally prosecuted.

Distribution of Holy Fire by Municipalities

Home delivery of the Holy Fire by municipalities is “unacceptable” and raises issues of public health.

Hardalias warned the president of the municipalities union (KEDE) to convey the message that the home delivery as announced by several municipalities is forbidden.

As Easter services will be held behind closed doors and congregations ought to stay at home, some municipalities worked out plans to bring the Holy Fire to households.

People need to understand that such a move “would invalidate our efforts so far” to contain the virus, Hardalias stressed.

According to official data on Wednesday:

52 new confirmed cases roses the total infections to 1,884, while 2 more deaths increased the death tholl to 83.

84 patients are intubated in Intensive Care Units. 14 patients have been discharged from the ICUs , so far.