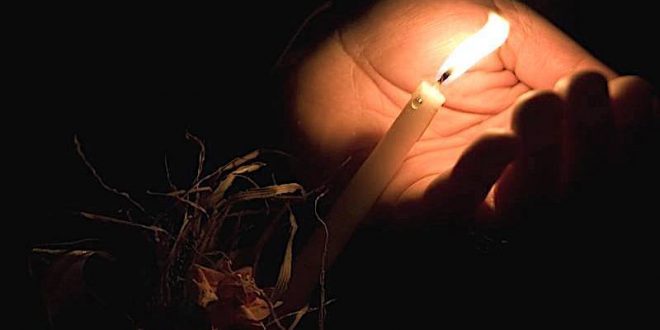 Several municipalities in Greece have prepared plans to bring the Holy Fire on Resurrection Saturday to citizens’ homes and so to avoid crowding outside churches even though this is strictly forbidden with the lockdown restrictions.

The plan looks simple: citizens will leave lanterns outside their homes, municipality teams will distribute the Holy Light. then citizens will go down and receive the fire and bring it home. Open is how the citizens will know when the

First it was the Mayor of Elliniko-Argyroupolis Municipality in eastern Athens who published the innovative plan on Tuesday evening.

The idea spread quicker than a wild fire and several municipalities started announcing since Wednesday morning that they will do the same. Epidaurus in peloponnese, Distomo and Arahova in central Greece, MArkopoulos in Attica, Naousa in western Macedonia and Xanthi in north-eastern Greece declared “present!”

In a statement in his Facebook account, Elliniko mayor Giannis Konstantatos, said he is planning a different celebration of the Resurrection due to the extraordinary conditions of the corovanirus pandemic.

Citizens will let a lantern outside the house or at the entrance of apartment buildings,  municipality employees will pass by and light it with the Holy Fire.

The mayor advises that citizens wishing to receive the Holy Fire should leave a “closed type of metal lantern” at the door step.

The distribution will be made by the staff of the social program “Help at Home,” and city counselors who will volunteer for Easter Saturday.

“There will be no human contact,” the mayor reassures and stresses that reason for the initiative is to discourage those – mainly elderly – citizens to go to the churches to receive the Holy Fire.

Prompt was the reaction by the Municipality of Epidaurus, in Argolida Prefecture, that announced it has been “working out a Holy Fire home distribution plan for 15 days now.”

“On Resurrection Saturday, a few volunteers will bring the Holy Fire to every neighborhood in our municipality,” a statement said adding that the volunteers will carry a specific movement permit signed by the Mayor.”

The Municipality in eastern Peloponnese, goes a step further saying that “from Sunday, April 12, Municipality loudspeakers will broadcast parts of the religious services of the Holy Week in the afternoon hours.”

The local authorities of Epidaurus call on citizens to comply with the movement restrictions imposed by the Health and Civil Protection and adopted by the Holy Synod of the Greek Church.

The Municipality of Xanthi announced that the Holy Fire distribution will be done with the help of municipality volunteers and the Greek Police. “Starting from Saturday (April 18), The distribution will take place for as long as it is necessary so that everyone receives the Holy Light,” a statement said adding that the initiative is in cooperation of Municipality, the Metropolis of Xanthis and the Local Directorate of the Greek Police.

This is not clear. It is up to the Civil Protection to decided whether to allow such a practice. Because if it will do, there will be no municipality throughout Greece that will not join such an initiative.

Regional governor of Attica and former President of municipalities Association Giorgos Patoulis said already that he disagrees with such praqctices.

Another unclear issue is how will citizens know that their lanterns have been lit so that they will collect the Fire.

Will police patrol or municipality cars will inform them per loudspeaker? Will the lighting teams ring the door bells?

It looks as if a very lot of people will be on the streets in the night from Easter Saturday to Sunday – and a lot of noise.

Over the weekend, Greece extended the lockdown measures until April 27, 2020.

UPDATE: Greece’s Civil Protection announced on Wednesday afternoon that such initiatives are “unacceptable.”

PS the mayors can now sleep in peace that they have secured some votes and can claim later that “at least, we tried it.”