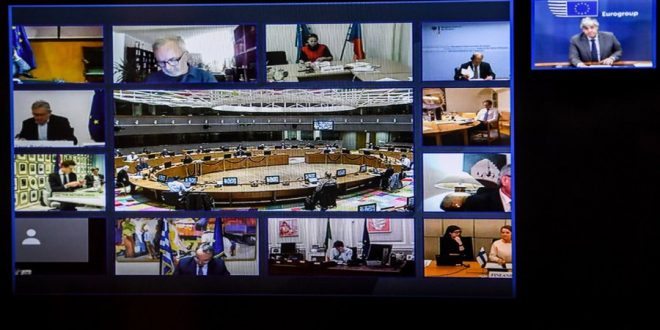 Greece to benefit from Eurogroup decision by 6 billion euros

European Union finance ministers agreed late on Thursday on a 540-billion-euro package of measures to combat the economic fallout of the coronavirus pandemic. “Today we agreed on three safety nets and a plan for the recovery to ensure we grow together and not apart once the crisis is behind us,” Eurogroup President Mario Centeno told reporters after the video conference.

The #Eurogroup answered the call from our citizens for a Europe that protects.

We agreed to 3 safety nets (for workers, businesses &public finances) adding up to half trillion €, and a plan for the recovery to ensure we grow together & not apart once the virus is behind us pic.twitter.com/P4JrUUIyjK

“The decision reached by the Eurogroup should be the starting point of even more ambitious – in the future – European initiatives on dealing with the effects of coronavirus, but also the return to normality,” Finance Minister Christos Staikouras said.

According to Staikouras, this is a new package of measures, both for tackling the current health crisis and for the subsequent reorganisation of European economies.

The package provides for increased funding for companies through the European Investment Bank, the implementation of a temporary programme to protect jobs, and the activation of the precautionary credit line of the European Stability Mechanism (ESM) adapted to the current health conditions.

The aim of this package of measures, totaling more than 500 billion euros, is to strengthen health systems, boost liquidity in the real economy, reduce unemployment and boost social cohesion.

According to Greek media, Greece will benefit from the Eurogroup decision with 6 billion euros.

Greece is gaining access to cheap European funding of more than 6 billion euros in order to deal with the economic effects of the coronation pandemic, notes website bankingnews.

The country will be able to raise:

at least 1 billion euros from the European Commission’s SURE program of 100 billion euros supporting employment programs. Note that Greece has the highest unemployment rate in the eurozone area.

at least 1 billion euros from the European Bank for Reconstruction and Development’s. the money will be channeled to small and medium-sized enterprises.