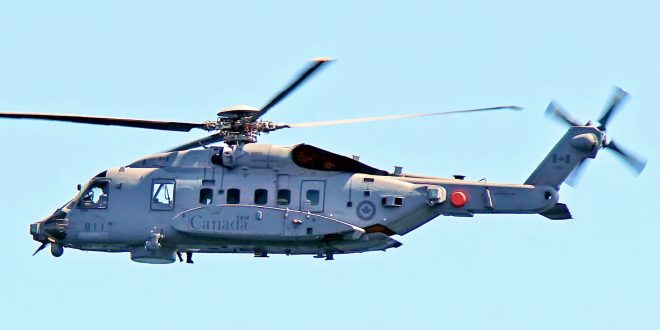 NATO: Canadian Navy helicopter with 6 onboard crashes off KefaloniaUPD

A Sikorsky CH-148 Cyclone helicopter of the Canadian Navy with 6 onboard went missing West of the island of Kefalonia and crashed into the sea on Wednesday evening. At least one dead.

The helicopter was on a routine flight mission.

It reportedly took off from the Canadian frigate Fredericton participating an military exercise of the Standing NATO Maritime Group 2. The role of SNMG2 is to provide NATO with an immediate operational response capability.

According to sources from the Greek Defense Ministry, the incident occurred at 08:15 p.m., when the aircraft disappeared from the radars.

The area where the aircraft fell is located 52 nautical miles off Kefalonia and 20 nm West the FIR Athens, inside the FIR Rome and in international waters.

While it is unclear what forces are joining the Search and Rescue operation, Greek media reported an hour after the crash, that debris was found and the body of one crew member was recovered.

The Royal Canadian Navy’s frigate Fredericton left for the Mediterranean Sea mid-January on a six-month deployment on Operation Reassurance, which sees the Canadian military work with its NATO allies.

Next to the Canadian frigate, war and other ships from the Italian, German, Greek and Turkish Navy participate in the NATO Force.

The Search and Rescue operation in the crash area continues and is conducted by Italian and Turkish ships.

Later on Wednesday, the Canadian Armed Forces confirmed the incident.

2/2 Search and rescue efforts are currently underway.
As this is evolving, we have no further information to provide at this time.

Also the NATO Command in Belgium confirmed saying that the rescue operation was underway.

Italian daily Corriere della Sera wrote that there were six people onboard.

Thursday morning Search and Rescue operation continues, a helicopter of the Greek Navy joined the SAR following an order by the Defense Minister after a relevant request, state-run news agency amna reports.