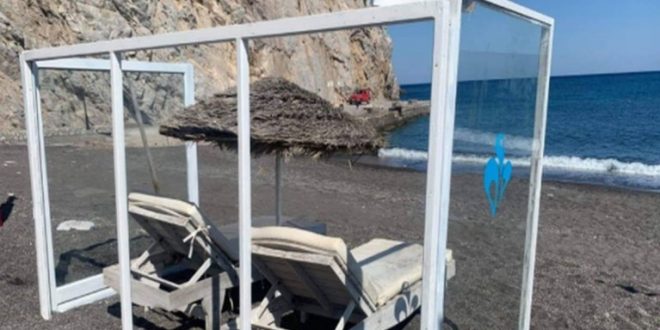 Santorini: Sunbeds and plexiglass to protect from crowding and infection

Tourism companies in Greece are “warming up” and they are trying to do some preparations as the summer and holiday season near. Things are still  fluid and vague as everybody is waiting for decisions and instructions from the state as the pandemic is still around. However, some entrepreneur like on the island of Santorini has already taken the necessary steps to protect the future clients from infection.

Plexiglass installation around sunbeds to protect sunbathers from crowding and contamination. 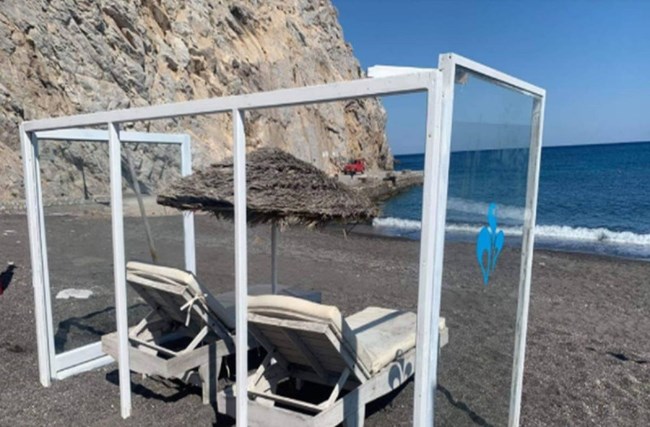 One plexiglass construction per two sunbeds and a 4-meter distance per sunbed set at the black beach of Perissa. The inspiration came from abroad, apparently from Italy where entrepreneurs made their thoughts about how to protect sunbathers in coronavirus summer. 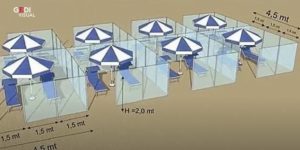 “We have made a plexiglass construction, one space per two sunbeds and with a distance of 4 meters between the sunbed sets. We have antiseptics and disinfection means and we will make constant use of disposable towels and mattresses. We believe that this is how we’ll be able to work,” Italian Charlie Chahine, a permanent resident and beach bar owner on Santorini told ANT1 TV on Monday morning, the first day the lockdown restrictions are eased in the country.

Chahine noted that he is waiting for the final instructions that will be given by the ministry for the rules of operation of the beach bars and organized beaches.

Swimming is allowed again as of May 4, however, organized beaches remain closed until mid June. However, some government officials hinted over the weekend that they were thoughts to open them earlier.

Development Minister Adonis Georgiadis revealed on Monday that there are also thoughts to open cafes, bars and restaurants earlier than originally scheduled on June 1.

Precondition for the change of plans is that there will be no new confirmed COVID-19 cases this week, the minister said.