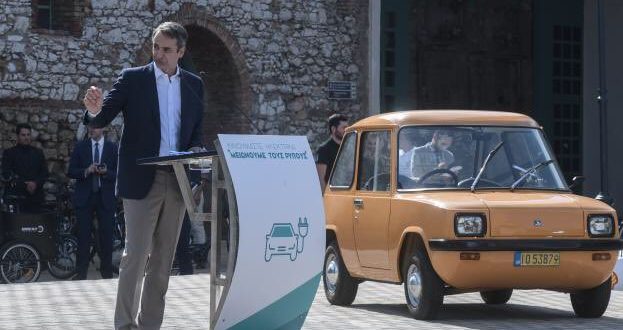 PM Mitsotakis announces incentives for purchase and use of electric cars

June 5, 2020 Economy Comments Off on PM Mitsotakis announces incentives for purchase and use of electric cars 1,936 Views

Prime Minister Kyriakos Mitsotakis presented on Friday the Greek government plan offering incentives for the use of electric cars. The plan includes purchase subsidizing, incentives for parking and charging, for company cars. The goal is that one in three new vehicles in Greece will be electric by 2030, Mitsotakis said.

“On this great day, the World Environment Day, the Greek government is officially announcing an emblematic initiative for the future. A policy that responds to the paucity of the past, but also to the justified concern of today. It is one of the main pillars of our environmental policy for giving up polluting fuels,” Prime Minister Kyriakos Mitsotakis said on Friday during the presentation of Greece’s plan for promoting electromobility.

It is a comprehensive plan that involves the state, local government, the market and civil society. For this reason it is accompanied by the extremely innovative and important green agreement, which will be signed by 19 agencies and two ministries, to implement the plan as soon as possible, the prime minister added.

The first part of the plan includes specific financial incentives to support a switch to electric vehicles.

“In the first phase, we are subsidising the purchase of new type cars with 100 million euros for 18 months. It is estimated that this will cover 25% of the cost for about 14,000 new electric cars. The benefit per unit, if combined with the ecological bonus and the relevant tax exemptions, will approach 10,000 euros,” the Prime Minister announced.

The cost of buying or renting such a car will be deductible from corporate income by 50% to 70% on the islands and the same exemptions will apply for the cost of installing corporate charging points.

The rate of depreciation of fixed assets in the companies that use electric or rechargeable hybrid vehicles will also be increased, Mitsotakis added.