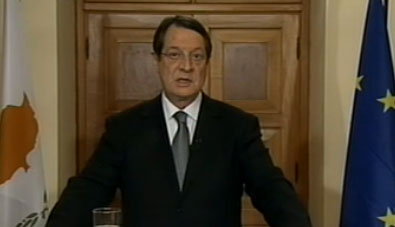 “If Turkey doesn’t tone down its aggression in the Eastern Mediterranean, it should lose it status as a candidate for EU accession,” Cyprus’ President Nicos Anastasiades said on Saturday.

In a video interview with Politico magazine, Anastasiades spoke about the Cyprus problem, natural gas, and aggression from Turkey in the island’s exclusive economic zone (EEZ).

The Cypriot President said that Turkey’s oil and gas exploration off the coast of Cyprus, which the EU says is illegal because it infringes on the island’s exclusive economic zone, is a step too far.

He added that “either they are compliant with the terms and conditions of any other candidate country, otherwise they could not be either a candidate or accepted.”

He said that “although, we are in favour of having Turkey as a member state of the European Union, we prefer to have a European neighbour rather than to have an aggressive state the way Turkey is behaving.”

Adding more names to the sanctions list is one of the alternatives available, said the Cypriot president.

“Yet, I believe that as the EU we are left with no other option than to address the whole spectrum of EU-Turkey relations.”

And a decision to formally stop the accession talks is “one of the steps we can take in order to send a strong message to Turkey, although I’d prefer to have a peaceful solution.”

Commenting on Cyprus talks, which have been frozen since failed talks the Swiss-resort town Crans Montana three years ago, Anastasiades said, in October, Turkish Cypriots will go to the polls and, if Mustafa Akinci is re-elected leader, reunification talks between the two sides of the island can “definitely” resume.

Regarding a bone of contention with the north over natural gas and potential benefits from exploration, Anastasiades added as a way to fairly divide revenue from the massive natural gas deposits thought to lie off the coast of Cyprus, and de-escalate tensions with Turkey, he has offered Turkish Cypriots a share of gas revenues if Ankara recognises Nicosia’s energy exploration rights.

“I’m ready to open an escrow account in favour of the Turkish Cypriot community, according to the population ratio,” Anastasiades said..

After Turkish drillships Fatih and Yavuz moved into the island’s EEZ, EU foreign ministers endorsed on July 15, 2019 measures concerning Turkey’s illegal drilling deciding, among others, to suspend negotiations with Ankara on the Comprehensive Air Transport Agreement and postpone the Association Council and other EU-Turkey meetings. The Council also reduced the pre-accession assistance to Turkey for 2020 and invited the European Investment Bank to review its lending activities in the country.