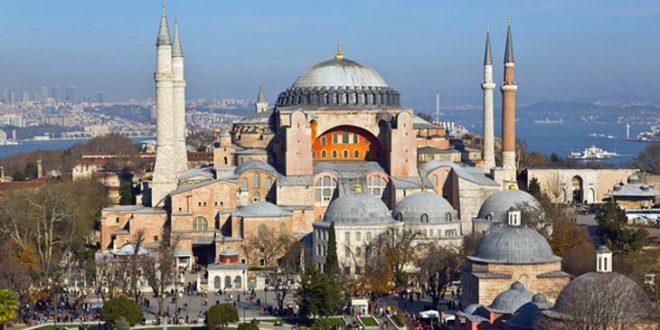 In the session that lasted just 17 minutes, the Court examined the Presidential decree of 1934 that turned the mosque into a museum. According to media information, the court found that the decree by the founder of modern Turkey, Mustafa Kemal Ataturk, was legal and according to the Constitution.

The Court took into consideration a previous court decision that was protecting the status of the museums and threw the ball into Erdogan’s court.

It ruled that the status of Hagia Sophia can change again with a new presidential decree, meaning that it is up to Erdogan to decide whether he will change the museum status and convert Hagia Sophia into a mosque.

Rulings of the Council of State are reportedly not binding for Turkey’s rulers.

The iconic Byzantine Basilica was built in the 6. century during the Byzantine Empire. It served as the seat of he Greek Orthodox Patriarch until 1453 when the Ottomans conquered Constantinople in 1453. The new rulers converted the Church into an imperial mosque a year later.

Turkey’s intention to change the status of one of the world’s most important historical and cultural heritage protected under the UNESCO World Heritage triggered strong reactions.

Greek Orthodox Ecumenical Patriarch Bartholomew warned that converting Hagia Sophia into a mosque would turn millions of Christians around the world against Islam.

Secretary of State Mike Pompeo urged Ankara on Wednesday to refrain from such a decision.

We urge the Government of Turkey to continue to maintain the Hagia Sophia as a museum, as an exemplar of its commitment to respect Turkey’s diverse faith traditions and history, and to ensure it remains accessible to all.

Turkey slammed Pompeo and the Foreign Ministry said in a statement “We are shocked at the statement made by the U.S. State Department on Hagia Sophia.”

Turkey protects all of its cultural assets, including Hagia Sophia, without any discrimination within the framework of the tradition of tolerance from our culture and history, the statement added.

“Hagia Sophia, situated on our land is the property of Turkey, like all our cultural assets,” it said adding that any issue regarding Hagia Sophia is “our internal affair as part of Turkey’s sovereign rights.”

“Naturally everyone is free to express their own opinion. However, it is not for anyone to talk about our sovereign rights in the style of ‘we urge, we demand’,” the statement added.

Turkey used the same “sovereignty argument” as it did to criticism that came from Greece.