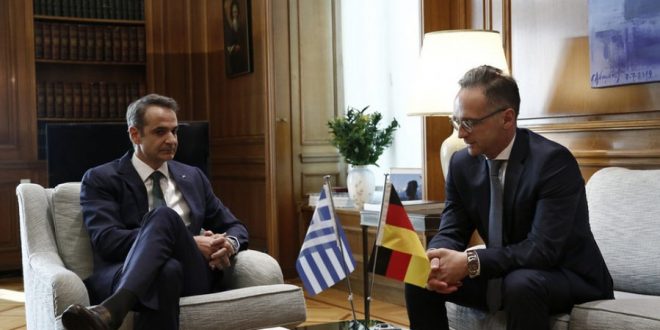 PM Mitsotakis: “EU sanctions on Turkey is the only way to ongoing provocations”

July 21, 2020 FEATURED, Greece, Politics Comments Off on PM Mitsotakis: “EU sanctions on Turkey is the only way to ongoing provocations” 925 Views

“EU sanctions on Turkey is the only way to ongoing provocations,” Prime Minister Kyriakos Mitsotakis said on Tuesday during a meeting with German Foreign Minister Heiko Maas whose country is holding the rotating Presidency in the European Union. Short time later, Mitsotakis called for an emergency meeting with the Greek Foreign Minister and had phone conversations with the Defense Minister and the Chief of General Staff.

“We have a very clear stance of solidarity here towards Greece and Cyprus,” the German Foreign Minister.

Referring to the Turkey’s NAVTEX and the planned hydrocarbon inside the Greek continental shelf, South-East of Crete and Kastelorizo, Mitsotakis told Mass:

“Turkey once again adds another link to to the chain of aggressive actions against Greece, against Cyprus, and finally towards the European Union as a whole. […]   What I want to tell you is that Greece is watching all the developments with confidence and absolute readiness. Questioning the sovereign rights of Greece and Cyprus is questioning the sovereign rights of Europe as a whole.”

Mitsotakis said that Greece is looking forward to the support of its allies and added “but you should also know that if Turkey continues to move in this direction, the imposition of sanctions by the European Union against Turkey will be the only way. It is up to Turkey to choose what relationship it wants to have with Greece, with Cyprus, with Europe.”

However, “I believe that at the moment Turkey seems to be choosing the wrong path,” Mitsotakis stressed.

German FM Maas said among others that the EU and the EU Council of Foreign Ministers have a clear stance of solidarity with Greece and Cyprus.

“This will be our role in the German Presidency of the European Union and we have also made it very clear to Turkey – as you just said – that it is indeed in its hands, if it puts an end to this provocative attitude towards Greece, be able to integrate into a dialogue. Otherwise it would be impossible,” Maas said.

He added “Let me tell you very clearly – that is, to confirm – that we will vigorously follow this line towards Turkey both bilaterally and at the level within the European Union.”