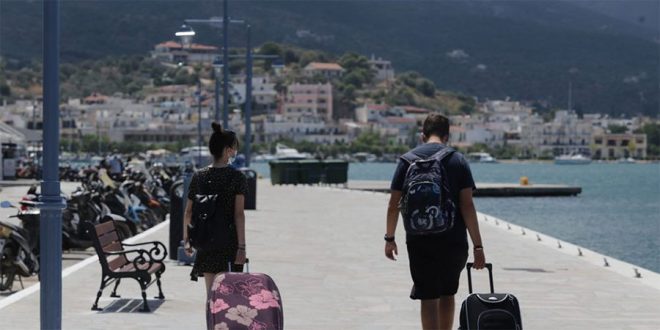 Domestic and foreign holidaymakers left the island of Poros as soon as they could over the weekend not only because of the coronavirus cases but also due to the restrictive measures that have practically paralyzed life on the island in the Saronic Gulf.

According to state broadcaster ERT TV, accommodation facilities were booked at 95% over the weekend, but the coronavirus restrictions led to massive cancellations. Some businessmen are considering to shut down their businesses for as long as the restrictions are in force.

The island is a favorite destination also for Athenians due to its proximity to the Greek capital.

ERT reported that confirmed cases stand at 30 on Saturday, while results from another 111 tests are being waited. According to daily ethnos, 24 cases were confirmed on July 28, while tests results form 130 people are expected.

Even if all 111 tests are proven “negative” the damage is done, a heavy blow for the economy of the island amid the peak of the tourism season.

Meanwhile, media report that the head of the local police unit is expected to be removed to another post, following denouncement by Mayor Giannis Dimitriadis, who blames the local police chief for the outbreak.

The mayor accused the police chief of “lack of action and for tolerance towards those violating” the general measures against the coronavirus imposed across the country last week.

Dimitriadis claimed that the police chief did not conduct the necessary control checks regarding the coronavirus, did not impose fines and closed down businesses violating the rules.

In an effort to rescue a grim situation, mayor Dimitriadis told media that Poros is now a “safe destination” due to the restrictive measures.

Poros is the first island and tourist destination where authorities imposed a kind of “lockdown” and thus amid the peak of summer holidays, at least for Greeks.

Authorities warn of more “local lockdowns” if confirmed cases do not increase in the next days.

PS the usual mean Greeks claim that the holidaymakers who left Poros may bring the virus to other tourist destinations. My cat said she is certain that all those have undergone Covid-19 test and that their personal data as well as their next stop have been registered by authorities.