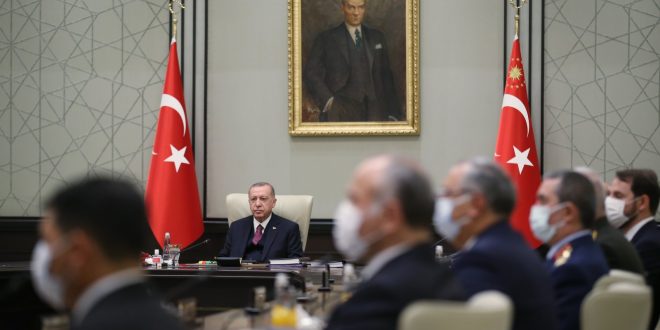 Under the chairmanship of President Recep Tayyip Erdogan, Turkey ‘s highest National Security Council (MGK) outlined the two main features of its policy towards Greece, short before the exploratory contacts resume. these two features are:  1. “Fair” distribution of natural resources in the area 2. Demilitarization of Greek islands.

“Turkey prefers dialogue but is committed to protecting its rights in the Eastern Mediterranean,” the MGK said in a statement on Thursday night.

“Turkey prefers dialogue in every platform about the fair distribution of natural resources in the area,” the statement read.

The council  “urged all countries to act with common sense and in accordance with international law, including “those who arm legally demilitarized islands,” referring to Greece’s move to send troops and other military hardware to Kastellorizo (Megisti-Meis), as well as smaller islets around the area, notes Turkish daily sabah.

Ankara claims that “Greece has disputed Turkey’s right to conduct energy exploration in the region, trying to box in Turkish maritime territory based on small islands near the Turkish coast.”

PS the problem with Turkey is that it wants to explore energy resources in a sea area that it is not hers – and it’s not going to call its own also in the future, near or far.  Before Greece woke up one morning and “boxed Turkey’s maritime territory”, Ankara had signed several Treaties, incl the one of Lauzanne, that allow Turkey to carry out any search it wants within a range of 6 nautical miles. Anything else outside this range is illegal. And that’s basically the end of the story.

Unfair? What is fair in life…?

I have the feeling that the exploratory contacts may not resume as soon as our European (call me Germany) and NATO partners wish.