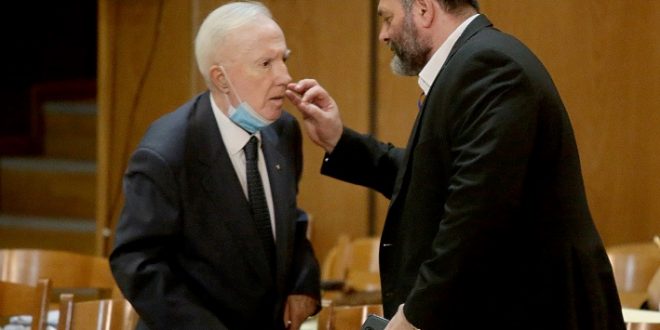 MEP and convicted Golden Dawn Giannis Lagos fired his lawyer and hired Constantinos Plevris. The 80-year-old lawyer is also a prolific far-right author and father of New Democracy MP Thanos Plevris who immediately distanced himself form the issue. Through his new lawyer, Lagos accused the judges of bias and appealed the Court decision to reject mitigating circumstances for him.

Lawyer Plevris demanded the expulsion of the judges, except the prosecutor, stating that  “there are suspicions of influence of the court by all parties and the media, even by the President of the Republic and the Union of Judges and Prosecutors.”

According to state broadcaster ERT, Plevris said that he did not have evidence to proof the judges’ bias, however, he said that they were influenced by the whole atmosphere against the party.

Lagos’ appeal caused  trial delay on Monday, as one of new judges appointed to review Lagos’ request recused herself herself from the case, setting set back the process by several hours.

Short after 3 o’ clock the Court resumed the prosecutor called on Lagos’ application to be rejected as no facts were submitted to the court in support of it.

Another adjournment took place as the civil action lawyers requested to speak on Lagos’ application. The prosecutor disagreed with the civil action’s request and the court adjourned to consider it.

Furthermore, the hiring of Constantinos Plevris caused also a rift with his son, Thanos, who is a lawmaker elected with ruling New Democracy party.

After Lagos’ lawyer submitted the application to replace the judges, Thanos Plevris wrote in a tweet:

“The submission of a request to exempt the judges, who applied the law and administered justice, after the issuance of the decision is done ostensibly and exposes whoever submits it. Democracy has ensured a fair trial and its deniers have been found guilty of the crimes they committed.”

Speaking to cnngreece</em>, Thanos Plevris commented that “with my tweet, it is clear that I distance myself from any request for the dismissal of judges, even after the verdict is heard.”

For live reporting from the trial check with @GoldenDawnWatch in English.