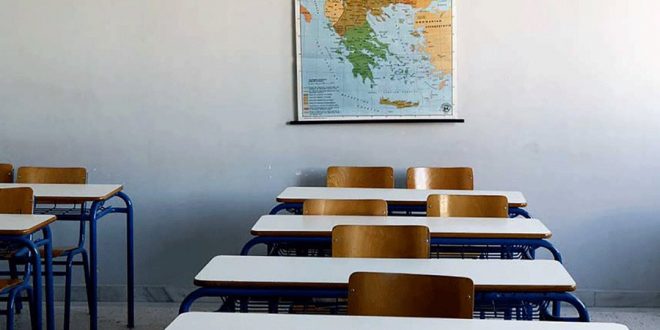 Dozens of children off Crete schools because parents are mask-deniers. Prosecutor investigates

Dozens of children have not attended a single hour in school classes on the island of Crete in the new school year because their parents are mask deniers. Juvenile prosecutors have intervened and investigate.

Almost 70 children in Crete have not taken a single hour of classes because their parents say they are masked deniers, media report.

The Education Directorate has informed the local Juvenile Prosecutor’s Offices, as the non-fulfillment of the compulsory education constitutes “neglect of a minor” and entails and criminal liability for the parents.

In the first phase, social workers are to get in touch with the families.

Dozens of students remain out of school for the second month in Crete, as their parents continue to keep them at home, declaring that they are against the use of masks, which is compulsory in schools.

The problem is now beginning to take on serious proportions and the children are at risk to miss one whole school year.

“In the first phase, there will be intervention by social workers who, by order of the juvenile prosecutor’s office, will go to the houses of the deniers to talk to the parents and children,” Manolis Beladakis, Director of Primary Education in the Prefecture of Heraklion, where the biggest problem is located,told newspaper efsyn.

According to the data collected, 69 primary and secondary education students in the four prefectures of the island have not attended a single class hour, since the beginning of the school year on September 14.

“We are not talking about children who have a justified absence due to medical problems or who have brought a relevant paper from a doctor. These are children whose parents have submitted a document that circulates on the internet, without any legal force, and with which they declare that they refuse that their children to wear the mask and become “guinea pigs,” Beladakis stressed

He added that  with the opening of the schools, at least in Heraklion, there was a much larger number of “mask deniers”  and about twice as many children who were absent from schools for this reason.

“Little by little, most of them were convinced and sent their children to school. However, the number is still big and the issue concerns us seriously given that 6 weeks of school courses have already passed,” he added.

Relevant information to the prosecutor’s office has been sent by the director of Primary Education in Lassithi Manolis Makrakis, for a total of 10 children “absent” from schools there. In Chania, his counterpart Popi Psaroudaki, the Director for Primary Education in Chania said that they are now  waiting for relevant instructions from the Education Ministry “so that we can take further action as time goes by to the detriment of the children.”

In total of 95,000 students attend all levels of education in Crete and the rate of the 69 missing students are less than 1 per thousand.

In absolute numbers, however, the Ministry of Education has to intervene even for one student who is unjustifiably absent from school, while the question remains whether there is a complete record of the phenomenon in other regions of the country, efsyn underlines.

Mask deniers had protested in the first day of school not only in Crete but also in other regions in the country. Some parents had even threaten teachers over the issue.

Note that education is compulsory until the 15th year of age and that there is no homeschooling in Greece.