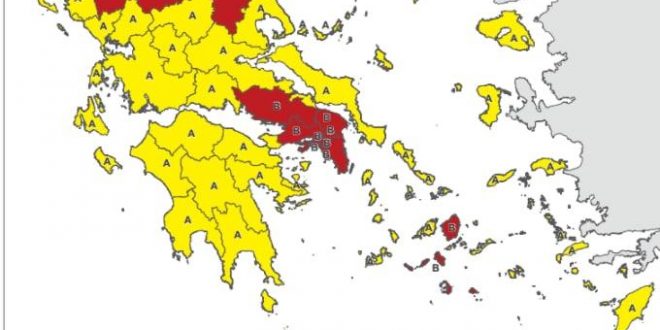 Greece’s Civil Protection presented on Saturday evening the new, 2-tier map showing regional units in “increased surveillance” and in “alert level.” The previous four categories are reduced into two. The map and the new categorization of regions based on Covid-19 infections is the guide for the new measures to go info force as of Nov 3, 2020. Red Regions are placed in partial lockdown.

According to head of Civil Protection, Nikos Hardalias, the map is valid for 14 days. 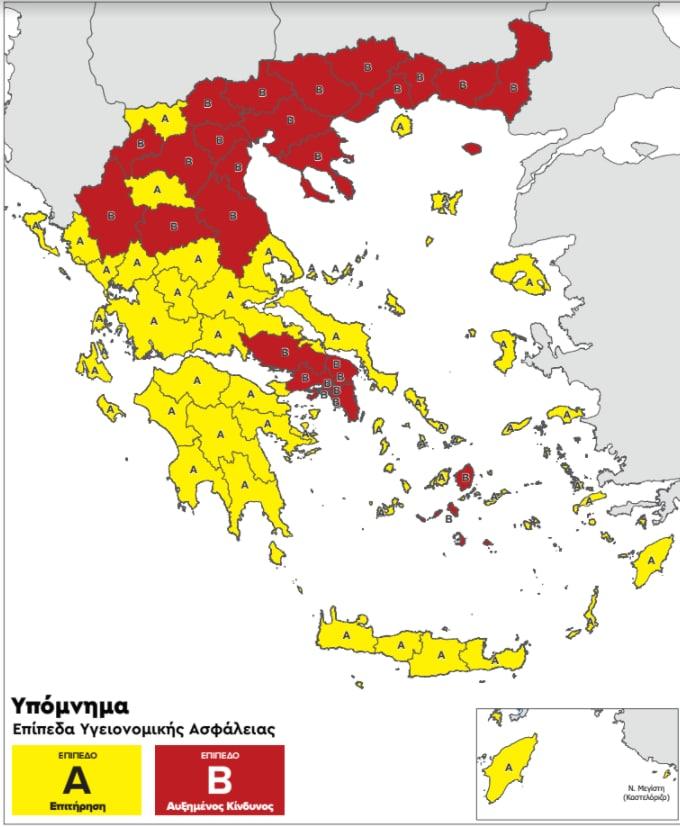 According to the measures announced earlier on Saturday by the Prime Minister, the use of masks in- and outdoors is mandatory nationwide as well as the night curfew from 12:00 midnight until 5:00 a.m.

In Red Zones restaurants, bars and cafes will shut down as of November 3, 2020 and for one month.

All the measures as announced by the Prime Minister are here.

Mandatory use of mask in- and outdoors

50% teleworking in private and public sector

Partiel Lockdown with Restrictions as in Tier 1 plus:

Suspension of catering and dining out, closed restaurants, cafes, bars etc. Exception: only take away and delivery

Suspension of operations of entertainment, culture and sports such as gyms, museums, cinemas, theaters, bars, cafes

At the live briefing on Saturday, Hardalias added that open air archaeological sites are open to the public across the country.

It is important to know that movement to other regional units is allowed.

Here are the measures in details, however, in form of cards and in Greek.

Hardalias announced a phone line <1520> where citizens can denounce where the measures are not observed.

Minister of Citizen Protection Michalis Chrysochoidis, underlined that the measures observance will be controlled with particular severeness.

“Whoever entertains himself, eats, drinks without measures observance, he is digging graves,” he said adding drama to the issue.

He even threatened that “behavior where citizens move from red zones to yellow zones for entertainment will not be tolerated.” He added that also in yellow zones there will be increased controls.

He did not elaborate, though, how he will punish region-to-region violators when movement from one region to another is not banned.

PS It looks as if they will unofficially tolerate that in 10-15 days, the whole map is red and they will not confuse citizens and visitors with some measures here, some there, and this and that and all half-measures written while they drive around. If you know what I mean…