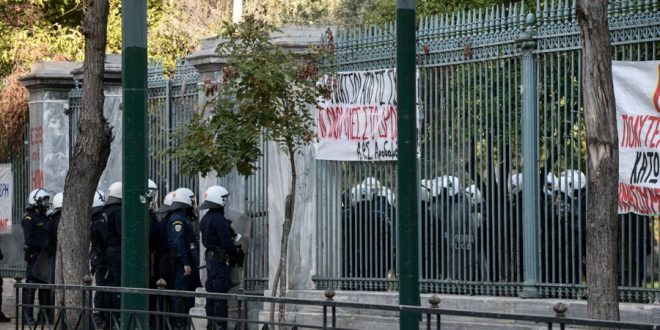 Tsipras: “The PM invites political leaders to violate the ban on public gatherings”

In a televised message on Monday, Prime Minister Kyriakos Mitsotakis that “the decision to not hold mass gathering and marches is imposed solely for reasons of protecting public health.” He invited the leaders of political parties to go together with the President of the Hellenic Republic to the Polytechnic School with a flower in order to honor the anniversary.

Former PM and leader of SYRIZA Alexis Tsipras rejected the invitation saying that the PM invites leaders to violate the order that he himself initiated. “Six party leaders and the President, these are seven people in total, when there is a ban of any group exceeding 3 persons,” he said.

He called on the government to revoke the order.

The 4-day ban on rallies ahead of the anniversary of the 1973 Polytechnic student uprising on November 17 has triggered fierce reactions by opposition parties who criticized the ban as “unconstitutional.”

SYRIZA was against the rally on November 17, however, the party signed a joint statement with Communist KKE and MeRA25 against the ban on public gatherings with 4 and more people.

Tsipras said that SYRIZA will not be visiting the Athens Polytechnic site on Tuesday, but a five-member party delegation will instead pay a symbolic visit to the buildings of Eleftherias Park where the Military Police interrogated people during the junta in Greece.

On Monday, Greece’s highest administrative court, the Council of State (CoS), rejected an injunction submitted by Varoufaki’s MERA25, human rights groups and ordinary citizens to lift the order by the Police Chief who banned nationwide public gatherings of more than 3 people thus suspending Article 11 of the Constitution and the “right to assembly” over the pretext of “health reasons.”

The president of CoS did not decide on the constitutionality of the ban but on the temporary suspension of the Police Chief decision.

The ban on public gatherings for public health safety concerns was approved by majority vote in parliament earlier this year and is not unconstitutional, said government spokesperson Stelios Petsas on Monday.

However, the issue is whether a Police chief can suspend Constitution Article 1 and the Greeks’ “right to assembly” when the Constitution stipulates that only the Parliament can do that.

Lawyers commented on social media that ‘The CoS has still not ruled over the unconstitutionality on the substance but only on the emergency.”

PS the usual mean Greeks have recalled that during the implementation of bailout agreements the only issue the CoS ruled that it was “unconstitutional” was the cuts on pensions and salaries of the judiciary.