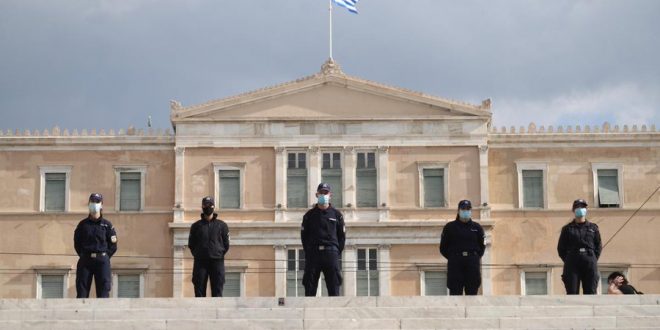 With the blessing of the government, the Greek Police has proceeded with the lockdown of citizens’ democratic rights and declared a 3-day nationwide prohibition of any public gathering of more than 4 people under the pretext of the coronavirus pandemic. The unprecedented decision not only literally suspends Article 11 of the Constitution and the right of Greeks to assembly but it violates the Constitution itself as it it only the Palriament that can suspend Constitution provisions.

Late Saturday night, the Police declared that no public gatherings of 4 people or more are allowed from 06:00 a.m. November 15 until 09:00 pm November 18, 2010. Note that on November 17 is the anniversary of the Polytechnic School Students’ Uprising against the military dictatorship in 1973.

Violators of the ban will be fined with €3,000 if they are natural persons and with €5,000 for legal entities, see political parties.

The decision of the Greek Police chief was published late on Saturday in the official gazette. 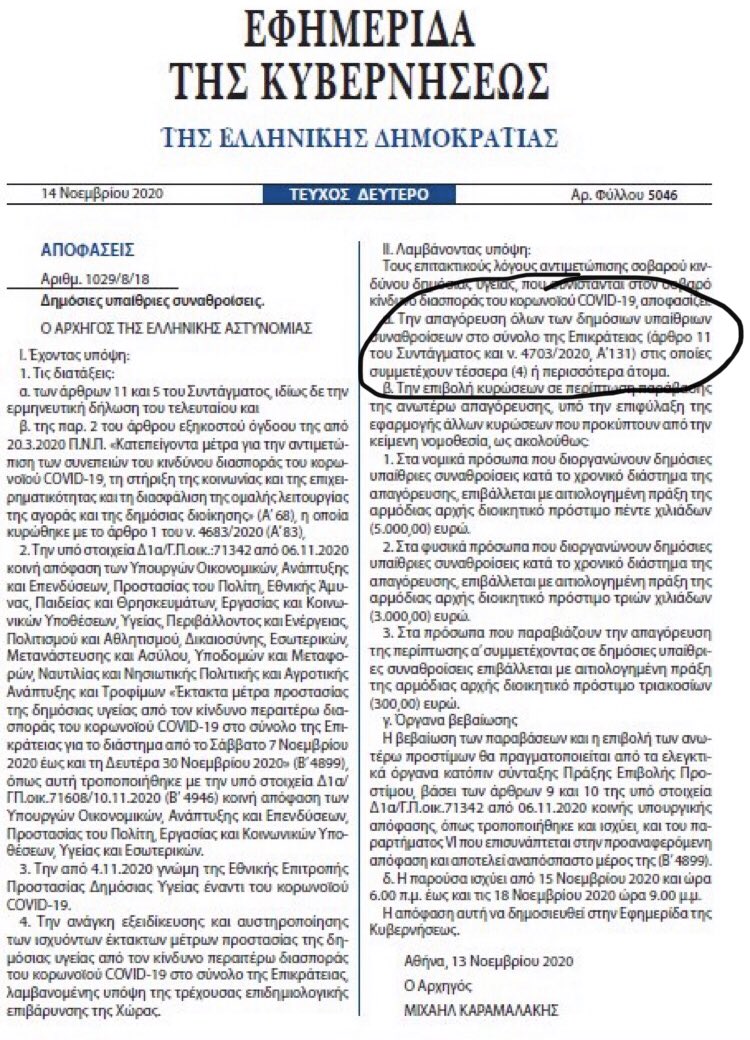 Citing “emergency reasons to deal with the serious danger of coronavirus spreading,” the chief of Police suspends Article 11 of the Greek Constitution. Note that only the Parliament can suspend such a Constitution Article.

News website of in.gr notes that the total ban on all public gatherings, that is the universal suspension of Article 11 of the Constitution, has been implemented twice in the past: On 21. April 1967, when the colonels seized the country and declared a military dictatorship and on 17. November 1973, when the colonels entered the Polytechnic school with a tank.

It is the first time that the right of assembly is banned under the Constitution since 1975.

The decision publishing came after Minister of Citizen Protection Michalis Chrysochoidis warned political leaders that that the Polytechnic School will remain closed and not rallies will be allowed. Speaking to Star TV, police unionist Stavros Balaskas said that “citizens or lawmakers who violate the law and the orders will be arrested.”

Only small delegations of political parties are supposed to be allowed to lay wreaths “after previous consultations with the police.”

Article 11 of the Constitution

The unprecedented decision by a Police chief to suspend an Article of the Constitution with the blessing of the conservative government has triggered an outrage on social media and several lawyers pointed out that it blatantly violates the Constitution.

Lawyer Vassilis Sotiropoulos noted, among others:

Law 4703/20120 on public outdoor gatherings stipulates that the competent police authority may prohibit “impending public assembly”, not the right to public assembly throughout the country for a number of days, notes lawyer Sotiropoulos recalling that ‘the constitutional provision that has never been implemented since the adoption of the current constitution.”

Assistant Professor of Constitutional Law at the University of Thessaloniki, Akritas Kaitzidis, pointed out that”

“The four-day universal ban on gatherings across the country is not a restriction but a suspension of freedom of assembly. And already for that is unconstitutional. But even if it is considered a restriction, the decision to impose it is illegal.

Vice President of European Parliament and SYRIZA MEP, Dimitris Papadimoulis tweeted that the decision was not taken following epidemiologists’ recommendations. “it is extreme and reminds dark eras. The right-wing [government] with top ministers who are orphans of the junta aims to cause incidents and division in order to hide that it failed to dealw ith the pandemic and the economy.”

In a statement communist party KKE described the decisions as a “monument to authoritarianism” adding that it will be “canceled in practice.”

UPDATE: The Association of Greek Judges and Prosecutors issued a statement Sunday afternoon, describing the “police chief decision as “unconstitutional” and urged that it should be “immediately revoked.”

It is the second that the pandemic is being used as an instrument, a pretext for other purposes. The first was for the Athens Great Walk in summer, and the Council of State ruled that it was “illegal.”

This time it seems to be for pure ideological reasons as at least two parties, Communist KKE and Varoufakis’ MeRA25, and several leftist organizations said that they will keep the tradition of festivities at the anniversary of Students’ Uprising. Main opposition SYRIZA had implied that it would stay away from the festivities.

On social media, Greeks in outrage are awaiting for the President of the hellenic Republic, Katerina Sakellaropoulou, a former judge at the Council of State, to take position on the issue.

Worth noting that Nov 16, 17 and 18 are working days where commuters in Athens and other big will be crowding again in public transport means as the government has taken no action to improve the situation.

PS Let’s hope police will not consider crowding in buses and metro, train platforms as “assemblies” and fines the commuters moving to and from work. Also those crowding in open markets, outside banks and public services or even fine priests for illegally open churches for the faithful ….