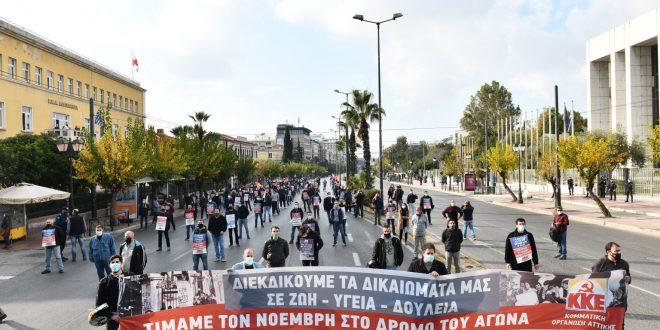 Members of the Greek Communist Party KKE gathered outside the US Embassy on Tuesday morning to mark the Anniversary of the Polytechnic Student’s Uprising against the military dictatorship on 17. November 1973.

The protesters were wearing masks and kept social distancing measures. 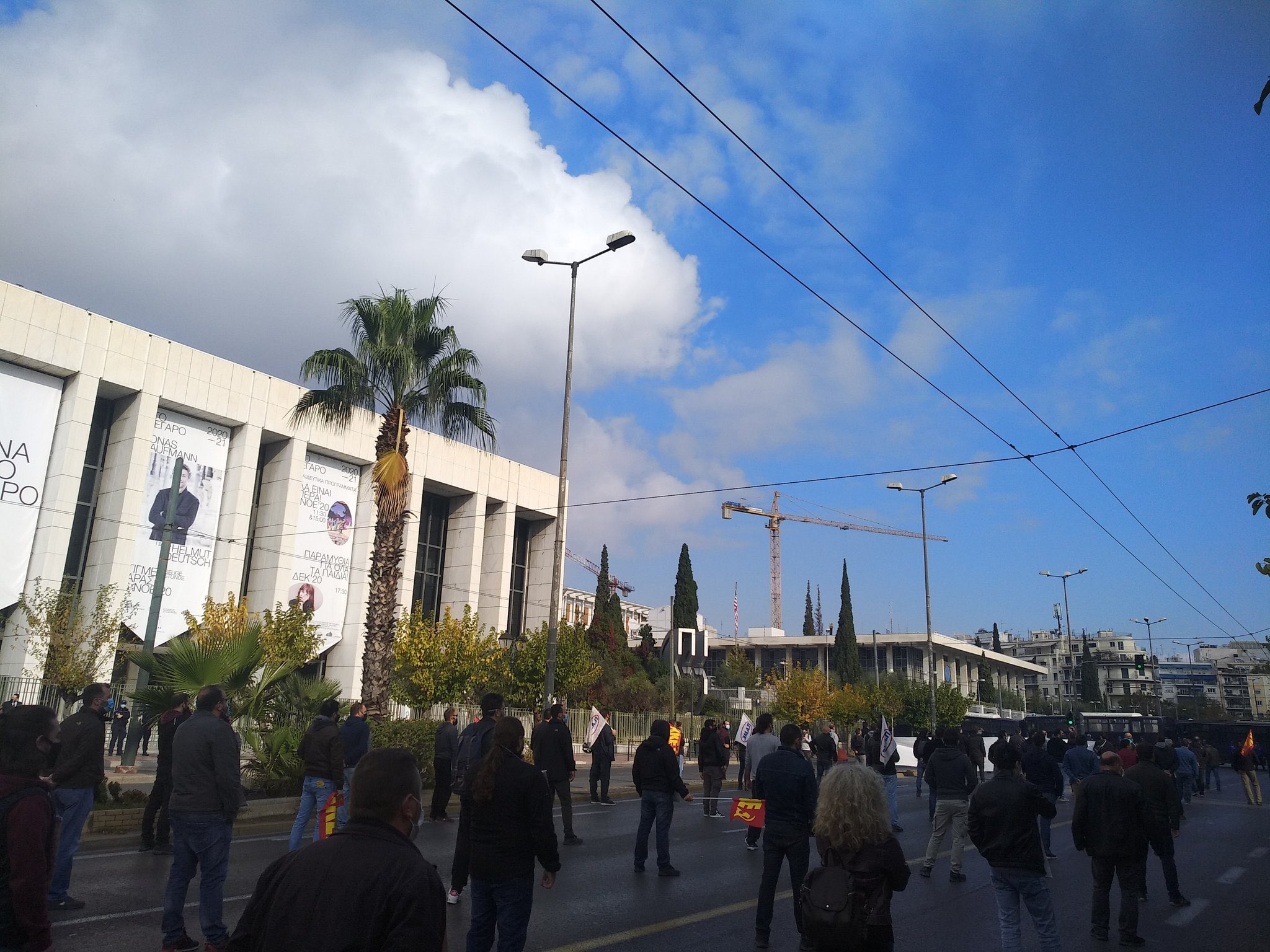 The protest took place despite the ban by Greek Police and heavy fines for participants.

General Secretary of KKE, Dimitris Koutsoumbas, attended the rally even though the Prime Minister had urged party leaders to uphold the ban. Earlier Koutsoumbas had laid a wreath at the building of the former EAT-ESA, the military police where thousands of Greeks were tortured during the colonels’ junta.

“the decision to ban gatherings of over 3 people, especially today, is unacceptable, unconstitutional and undemocratic,” Koutsoumbas said.

From the very first moment of the constitutionally controversial blanket ban, the KKE had said that they will hold a rally to honor the Students’ Uprising. 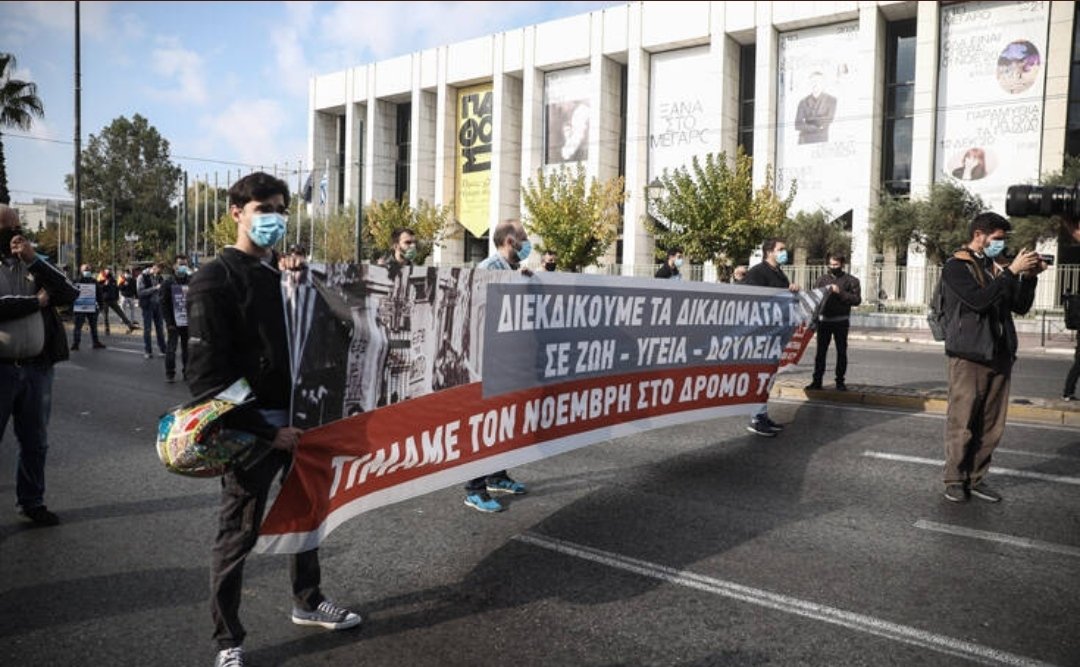 KKE Banner: “We our claim their rights to life, health, work, we honor November, the struggle.”

Greek Police has deployed over 6,000 officers across the center of Athens,helicopters and drones, in order to prevent the traditional large gatherings at the anniversary, amid fears that they could turn into a super-spreader event. Note that Police increased the number of policemen by over 2,000 on Monday.

Police outside the Athens University – KKE outside the US Embassy: Which one is a super-spreader event? 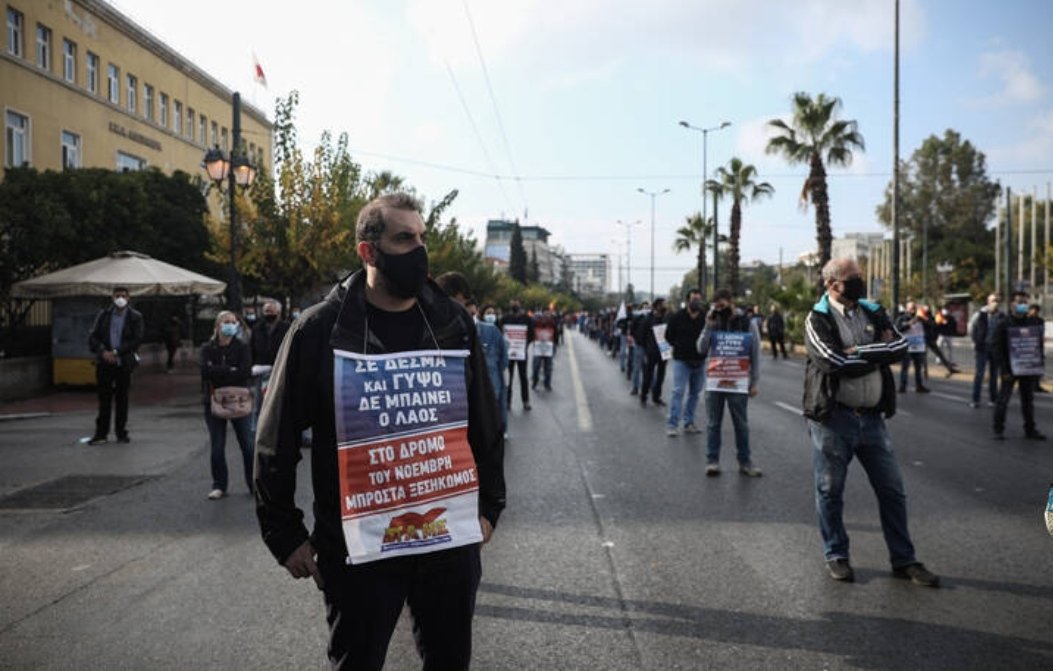 However, the police plan apparently did not work well. Majority of police officers were deployed around the Polytechnic School next to the National Museum and at the University of Athens, while there was no squat at the US Embassy, where normally the traditional marches on November 17 end in the afternoon. 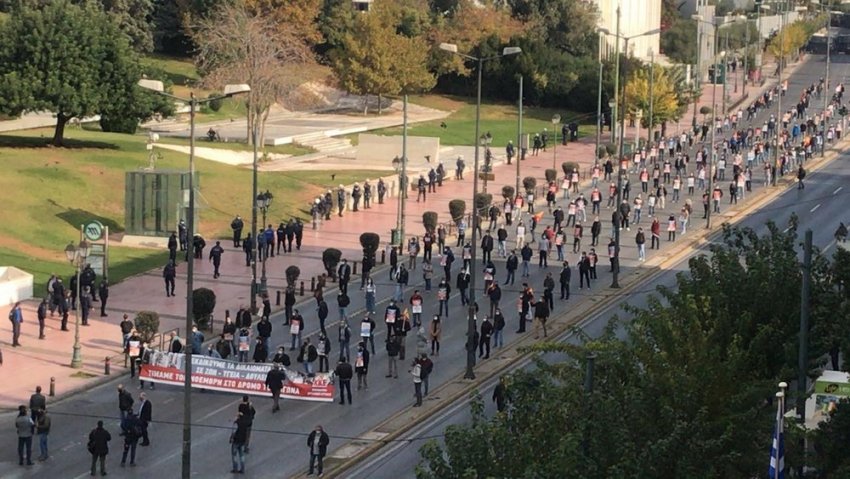 So, while police was waiting for the KKE in the area close to Omonia Square, the comrades changed their plan and held their march and protest outside the Embassy.

Obviously in panic, Police closed the five metro stations in downtown Athens at 11 am, an hour earlier that oringinally scheduled? Too late.

Meanwhile, KKE denounced a “provocation” against it by the state-run news agency that reported about the protest posting a picture from an older rally where the comrades were marching holding each other.

On social media, Greeks cheer the KKE action as “epic.”