Breaking News
Home / News / CORONAVIRUS / Greeks ask: How far can I go away from home for ‘exercise’ during lockdown? 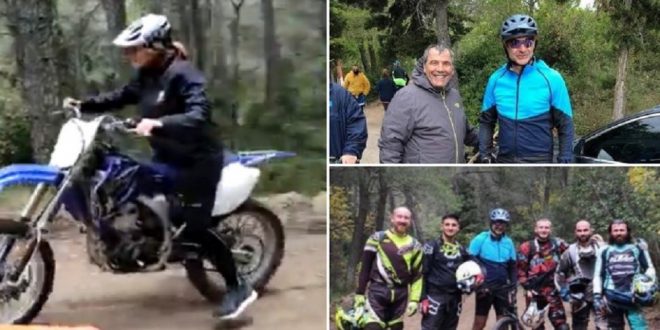 Greeks ask: How far can I go away from home for ‘exercise’ during lockdown?

December 2, 2020 CORONAVIRUS, FEATURED, Greece Comments Off on Greeks ask: How far can I go away from home for ‘exercise’ during lockdown? 4,828 Views

Greeks are confused and keep asking: How far are we allowed to exercise away from home under lockdown restrictions? The question demanding urgent answer arose after published pictures and videos showed Prime Minister Kyriakos Mitsotakis and his wife biking and motocrossing in the forest of Mt Parnitha, some 25 km away from Greek capital Athens and consequently also their home. Others also question if motocross in a Protected Forests is in general allowed.

The point is that there is no explicit definition of issues like this neither by the Civil Protection that usually imposes the measures nor by the Greek Police that fines those violating them.

Another point, a political one, is that there is no official position by the PM’s office with the effect that high-ranking ministers have merely little idea of what they are talking about when they are called to justify that the PM and his wife are above the laws applying to ordinary citizens.

Development Minister Adonis Georgiadis said on Wednesday morning that Kyriakos Mitsotakis “did something legal” and that “sports on the Mt Parnitha were allowed.”

Of course, sports are allowed everywhere and a PM may have “more movement freedom than the common citizens,” as a New Democracy MP said earlier today, but his wife?

The issue is not sports like hiking or walking on Mt Parnitha but how far a citizens under the lockdown is allowed to be away from his residence. Once lockdown 2 was imposed on Nov 7, police had forbidden a woman to move from Drapetsona in Piraeus to another municipality for a swim.

Fact is there are not distance specifications and it is in police’s court to decide if one is too far away from home or not, issue a 300-euro fine or not.

Citing Civil Protection sources, news website ieidiseis.gr reported on Wed that “there is a gap [in specification]” and that “the given instructions and recommendations for individual sports are for near the place of residence

Asked if it is allowed to move to an area other than the place of residence for sports, the same sources said  that “there is no legal framework that prohibits it.”

The sources, the website noted, were quick to clarify that in any case “it depends on the kind of sports.”

“It is simply an issue that depends on the controller. The police officer must somehow understand that you are not going for a coffee in Vouliagmeni,” the sources stressed.

They cited what the head of Civil Protection Nikos Hardalias said about “individual sports,” and referred to surfing, as example.

“A sports that needs a board and other equipment and under certain conditions can be allowed if the citizen proves that he goes to the sea for this reason,” the sources said.

Apart from the lockdown measures against the coronavirus, it is also crystal clear that the PM’s wife should not take a motorbike for a motocross in the woods.

As for the motocross in the Protective Forest of Parnitha, it is clear that it is forbidden.

Sports with motor means in National Forests and Forest is forbidden,” deputy president of the Managing body of the National Forest of Parnitha Giannis Stamou told media.

The general manager of the Greek chapter of Greenpeace, Nikos Charalampidis, spoke of a “wrong message” to the citizens. “If it is done by a person important for the public life then it is twice wrong.”

Another interesting fact is that the first narrative circulated by some ND officials at the PM’s office was that the published pictures “were old,” from some 2 months go and that they were aiming to target the PM.

This aspect had to be dropped for obvious reasons: the eyewitnesses with which Mitsotakis had the pictures with.

PS Anyway, Hardalias may shed light on the issue at the live briefing today, as dozens of Athenians declare on social media that they are getting ready to raid Parnitha, Nea Makri and other forests or famous promenades along the coast line of Attica over the upcoming weekend.