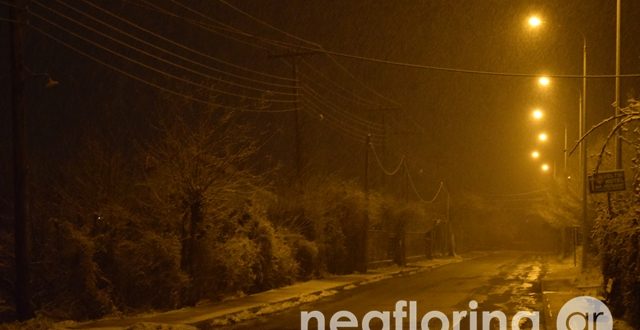 Cold front “Leandros” with dense snowfalls and very low temperatures has started sweeping across Greece and the National Meteorological Service EMY has issued a weather warning. The cold snap will bring snowfalls in areas of a higher altitude in northern and central Greece but even in the lowlands of Macedonia, Thrace and Thessaly. Snow is forecast also for Attica.

Temperature drop below the freezing point are forecast during the night also in low altitudes. Full frost is forecast in higher altitudes in central and northern Greece from Saturday until Monday, Jan 16-18, 2021.

Even though there will be intervals of better weather between snowfall, the extreme cold, especially during the night, is expected to create a lot of problems.

According to EMY warning, the cold weather front will affect the country in successive waves as of Thursday night, Jan 14 with main features: 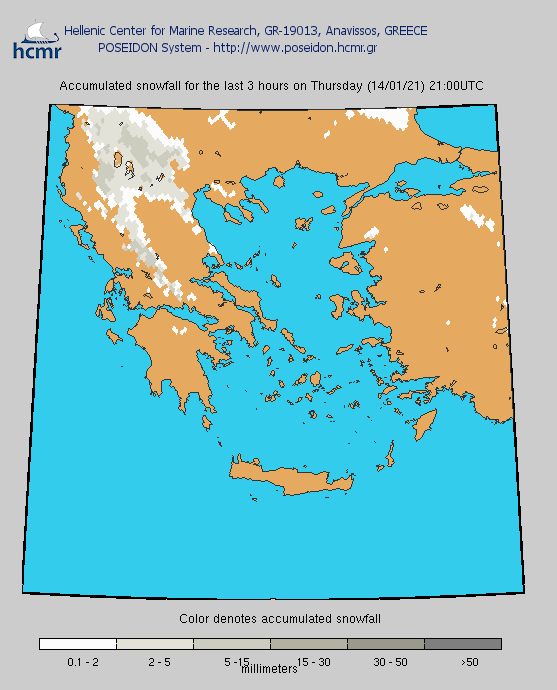 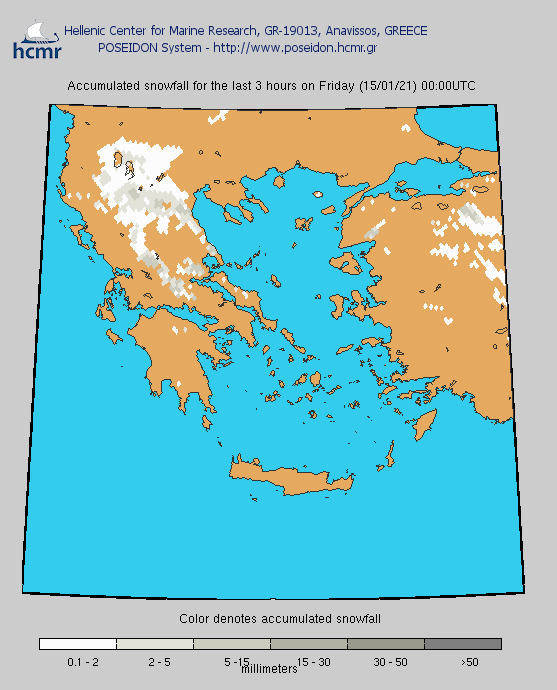 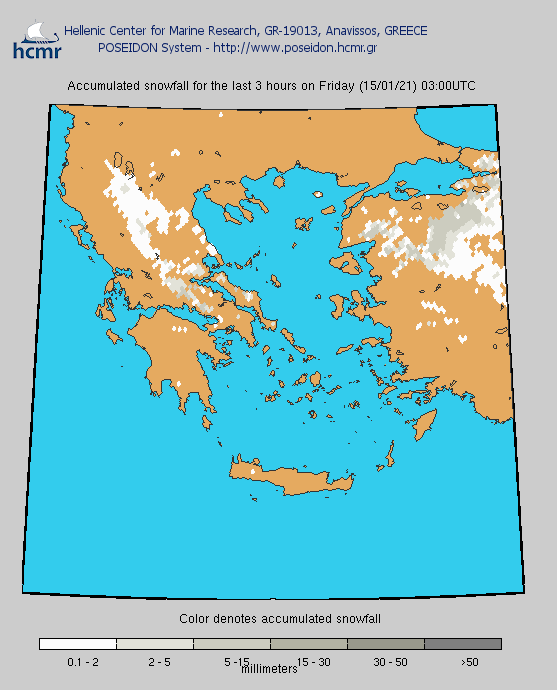 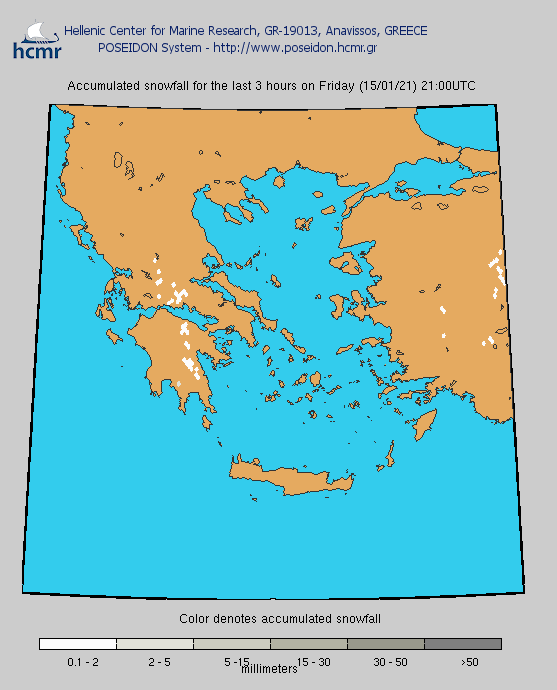 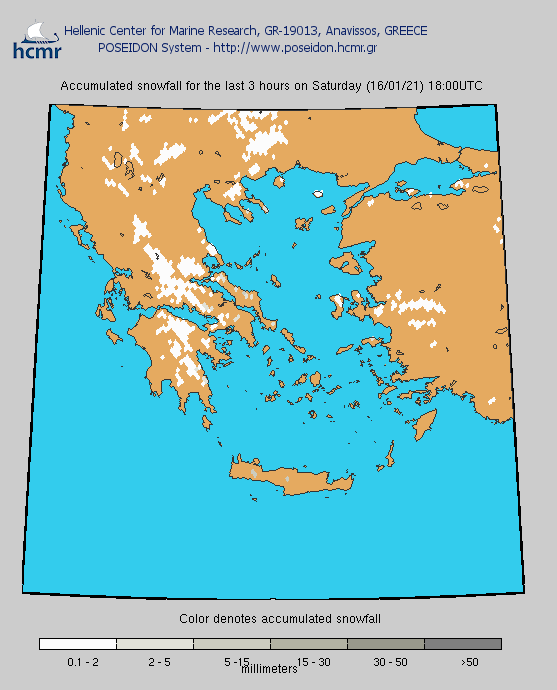 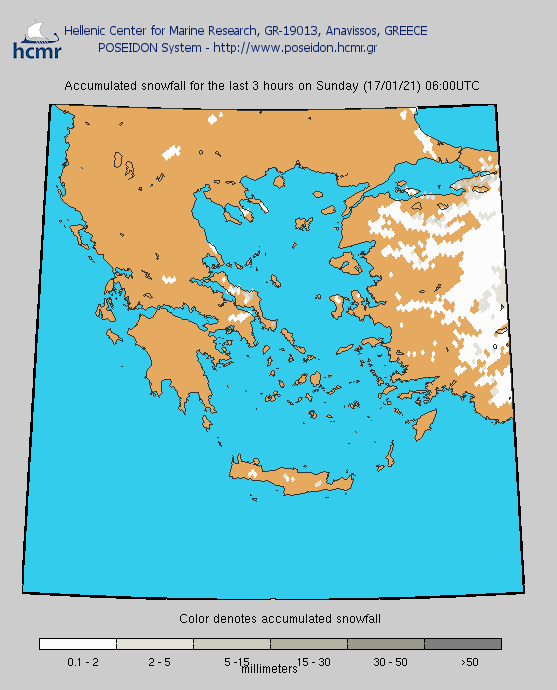 The weather will worsen from tonight Thursday night and from
the north with main features:

Weather deterioration as of Thursday night.

From the evening hours of Thursday until its morning hours
Friday: Macedonia and Thrace (mountainous and temporarily and in lowland areas), Thessaly (400 meters), the mountainous and semi-mountainous areas inEpirus and the rest of the central country.

Dense snowfalls locally in Macedonia and Halkidiki on Thursday night.

From Friday afternoon: the Dodecanese.

Bad weather is forecast from the West to South-West with main characteristics:

From Saturday noon: Macedonia, Thrace. the islands of the northeastern Aegean Sea, also in
lowland areas. Also in lowlands areas of western and central Macedonia, as well as in Thessaly and the northern regions of eastern Sterea and Evia. At times the snowfalls will be dense.

On Sunday, snowfalls in the west are expected to stop temporarily.

In the east, however, and mainly, in the leewards of the east mainland, in Evia and the islands of the north and
eastern Aegean will continue at intervals and in the plains areas.

In the morning and noon hours of Saturday: Cyclades, Crete

North winds with intensity of 7-8 Beaufort.

A new atmospheric disturbance from the South-West will cause a new weather deterioration, in the central and southern areas of the country.

Frost will prevail every day until Tuesday, Jan 19, during the evening and morning hours mainly in the mainland in the North. It will be very strong locally.

Total frost in areas of Macedonia and Thrace, on Saturday and  on Sunday. 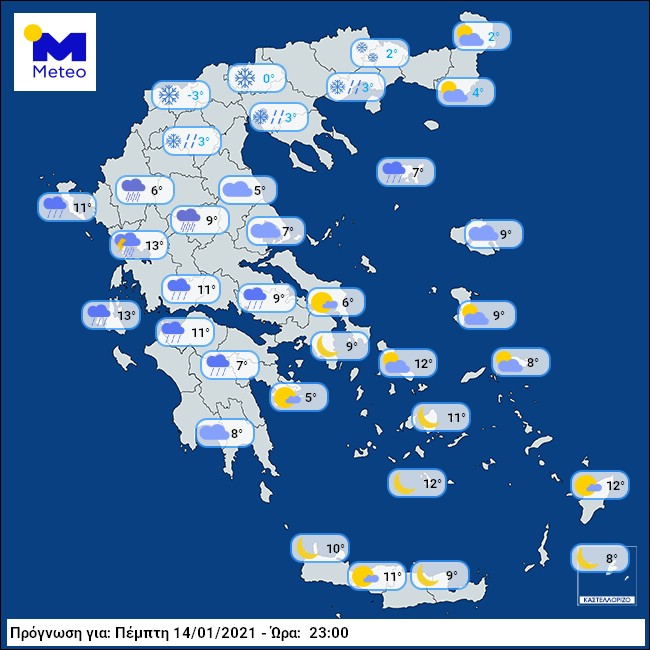 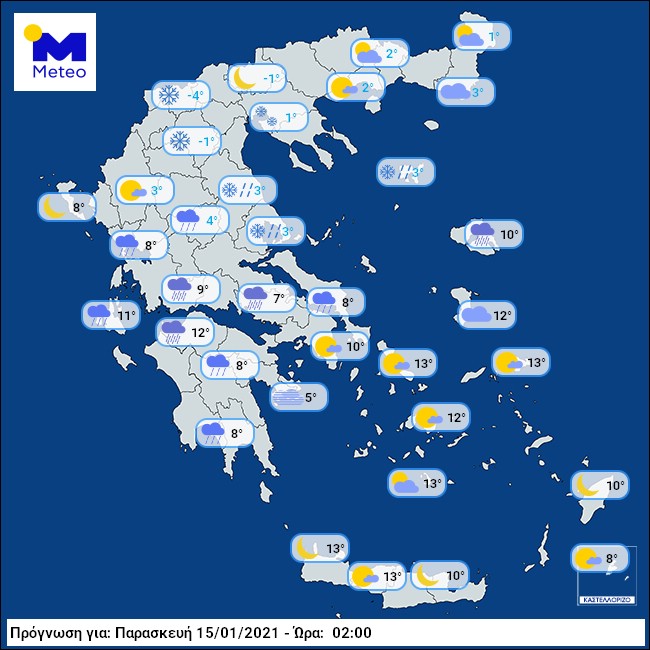 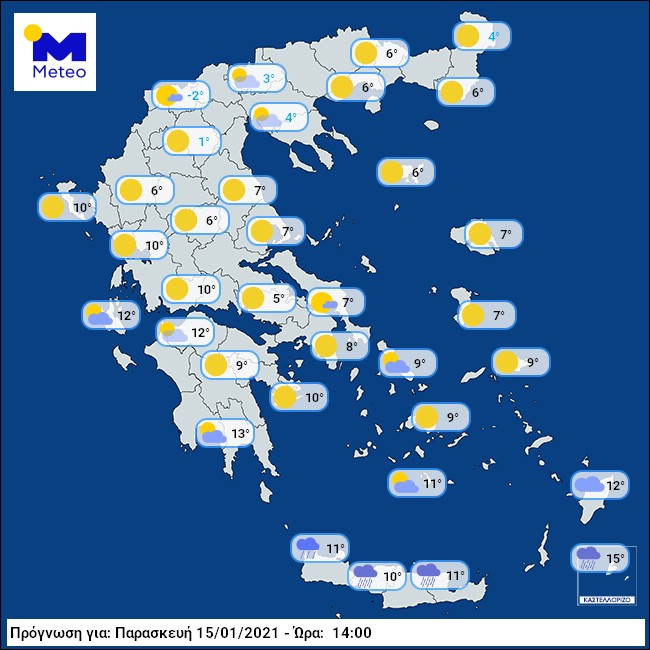 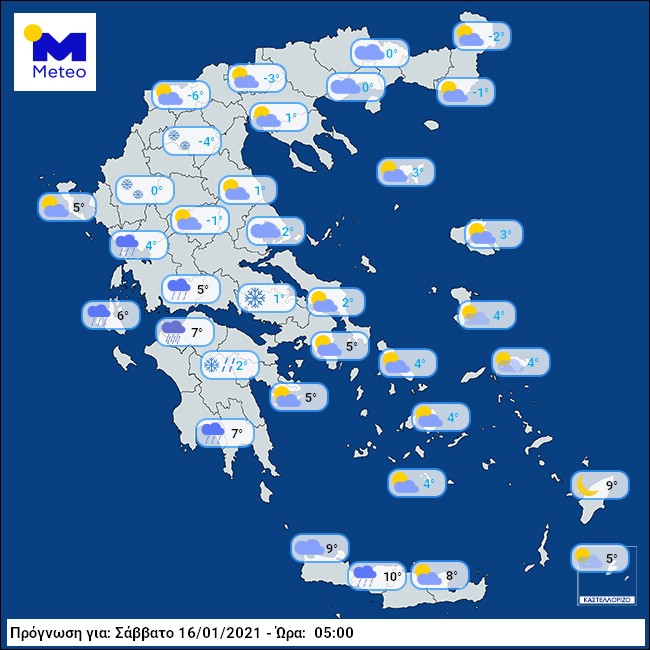 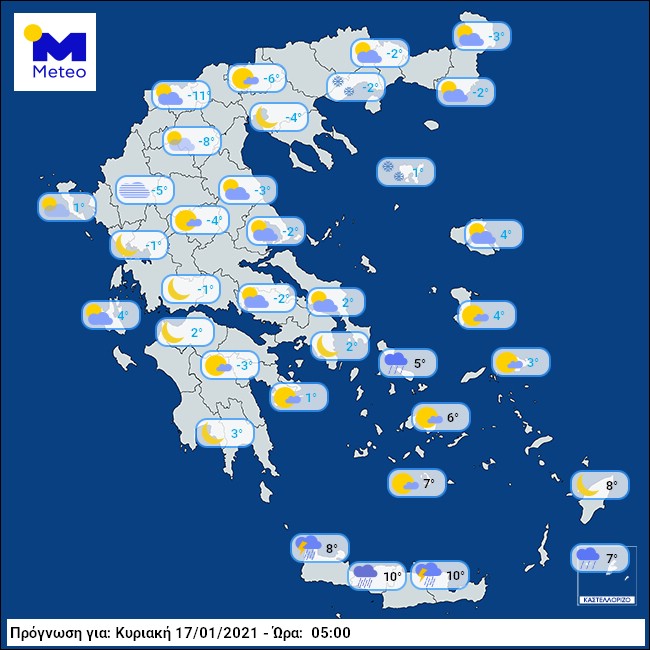 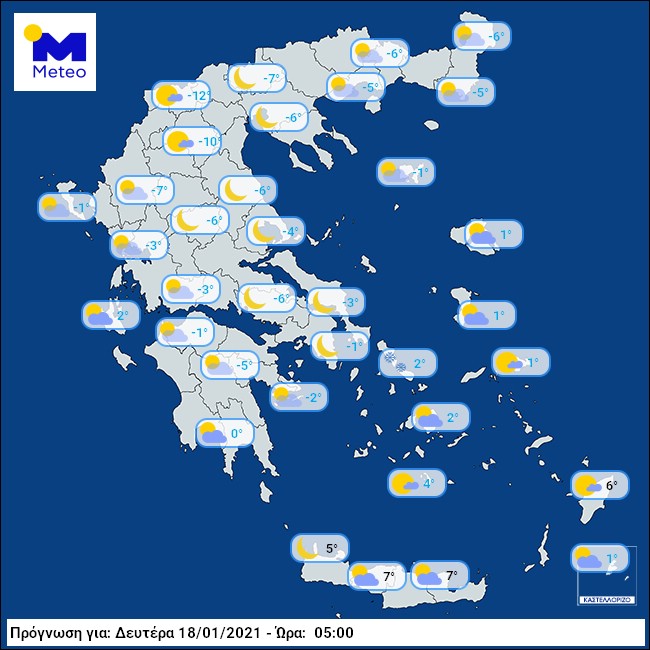 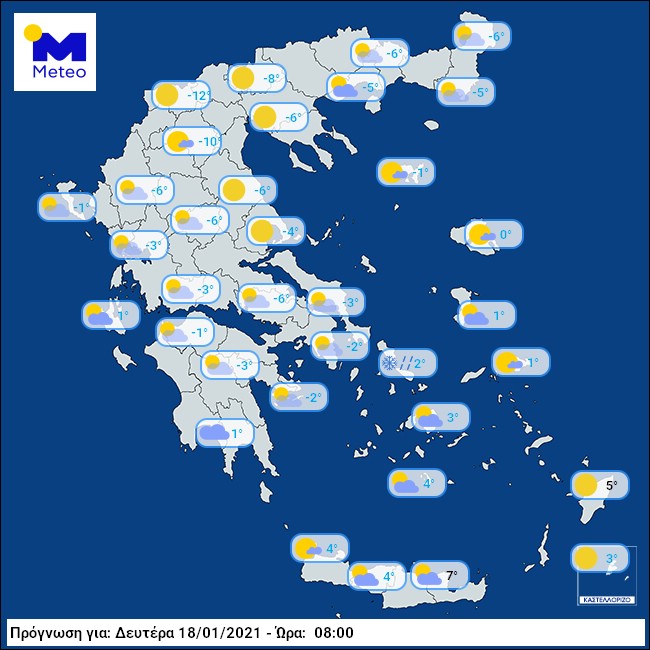 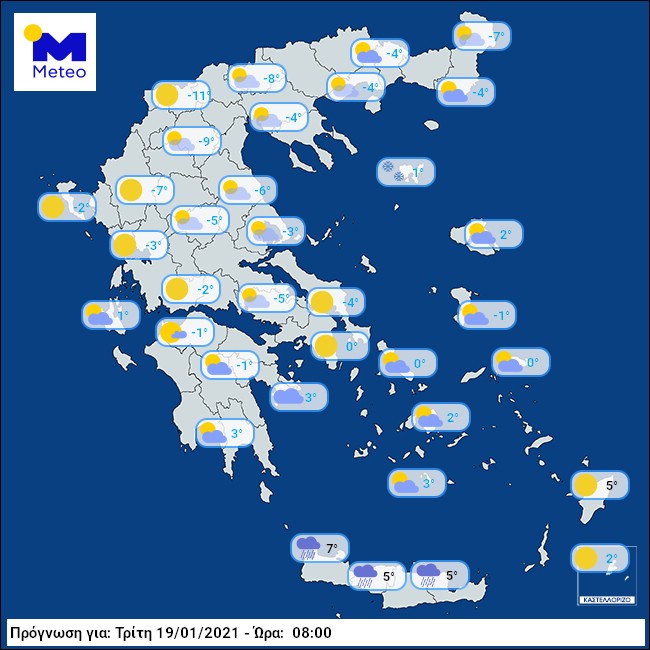 In general the weather deterioration already brought temperatures down in the night from Wednesday to Thursday (Jan 13-14) and the first snow fell also in Mt Parnitha, in North-West Attica.

According to the meteorological service of the National Observatory of Athens meteo, in Lailia, Serres temperature reached -10.6°C.