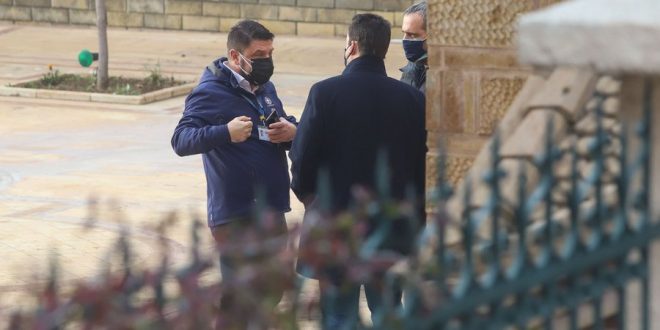 The fist cases of South African mutation of Covid-19 have been detected in Thessaloniki, northern Greece, the Civil Protection announced on Sunday. It is not officially known, however, how many cases of the mutated strain have been found.

According to initial media information, the first mutations of the South-African strain have been detected in priests of the Holy Metropolis of Neapolis, a municipality of the second biggest city in the country.

According to the relevant statement, the head of Civil Protection and deputy minister Nikos Hardalias and the President of the National Health organization EODY, Panagiotis Arkoumaneas  rushed to Neapolis and the Holy Diocese Sunday afternoon after consultation of top epidemiologist Infectious Diseases professor Sotiris Tsiodras.

The two officials are to coordinate the tracing of all contacts of the infected people and to assess the epidemiological situation in order to limit the spread of the mutated strain that is considered as “dangerous” and even more than the British mutation.

“The first detection of the mutation was found in the area of Thessaloniki, there is no reason to panic.  The strain was found at a church official. In any case with the assistance of the Metropolis and of the people of the parishes involved we will conduct sweeping tests in the wider regions and follow the contacts’ path.”

He also said that authorities “do not know how it came to Greece. We have some indications and we will take the necessary measures.”

He added that authorities “will move according to the plan and the vaccination will continue as normal.

Earlier on Sunday, Health Minister Vassilis Kikilias, told Skai TV that there are two things concern him with regards to the pandemic: “One is, I see that there is an issue with mutations in Greece. Now we find them everywhere. The second issue is that people are tired [ of the measures].”

He appealed to public to continue with the individual protection measures.

It should be recalled that the British mutation has been detected in Greece since the beginning of January, initially in travelers from abroad. Meanwhile, infections with the British strain have increased to “more than 66” – so health authorities on Friday, Jan 29 – with some of them to have “unknown source of contamination.”