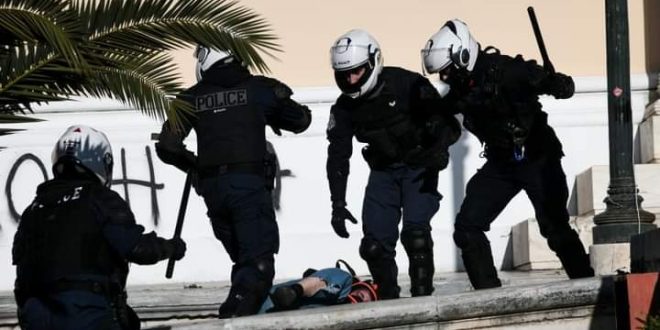 With teargas and sound flares Greek police cracked down student protests in Athens and Thessaloniki on Wednesday. Students, teachers, academics, high school students, parents marched through the cities against the Education bill that provides among others,he presence of police at universities.

Thousands of #students protest for yet another week in Athens against the government’s bill for education, which aims to introduce police in universities. #Greece pic.twitter.com/b4JcpEygQH

The protest in Athens was peaceful, yet some incidents took place when the rally reached the Greek Parliament opposite the Syntagma Square. Riot police reportedly fired tear gas and detained some people.

Students protesting against the government’s education bill, clash with police outside the parliament. #Greece pic.twitter.com/jl4anzUMQW

Soon, the situation got out of control, with extensive use of chemicals and beating students, even those already detained and in handcuffs.

Even photoreporters covering the rally and the clases did not escape police’s anger. they beat and pushed to the ground a member of the media, as capture on footage by photoreporter Savvas Karmaniolas

A total of 52 people have been detained.

Similar was the situation also in Thessaloniki.

Just got back from student protest rally (4-5,000 turnout) in city of Thessaloniki. It was peaceful till the police started using flash bangs and tear gas and ended up with them chasing students through downtown. #Greece #πανεπιστημια #Θεσσαλονικη pic.twitter.com/TF113EMF0t

According to media, in Thessaloniki, it was a group of protesters who first attacked police.

According to latest information a second protest is readying in Thessaloniki.

Nassive students protests were held also in Chania, Patras and other cities where there are universities.

The bill that is scheduled to be voted at the Parliament later today provides changes in higher education, presence of police at universities, time limits to studies and punishment for students.
Among others, the bill makes access to universities more difficult to graduates of evening schools (schools for working students) and decreased the entrance rate for students with disabilities.
Furthermore, the majority of the academic community opposes the presence of police at universities.
But the government and the Education Minister in the democratic country called Greece just ignore the community’s point of view.