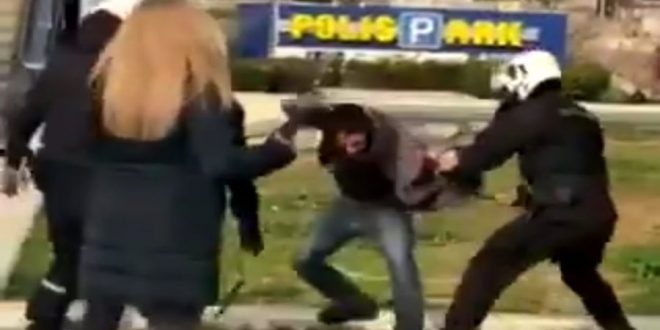 Sunday at the central square of Nea Smyrni was supposed to be relaxed for the residents of the suburb in southern Athens, but turned ugly when police terrorized families with children and brutally beat peaceful citizens who were standing by.

Batons fell on peaceful citizens for no reason in another act of arbitrariness which has turned into routine behavior in recent weeks. 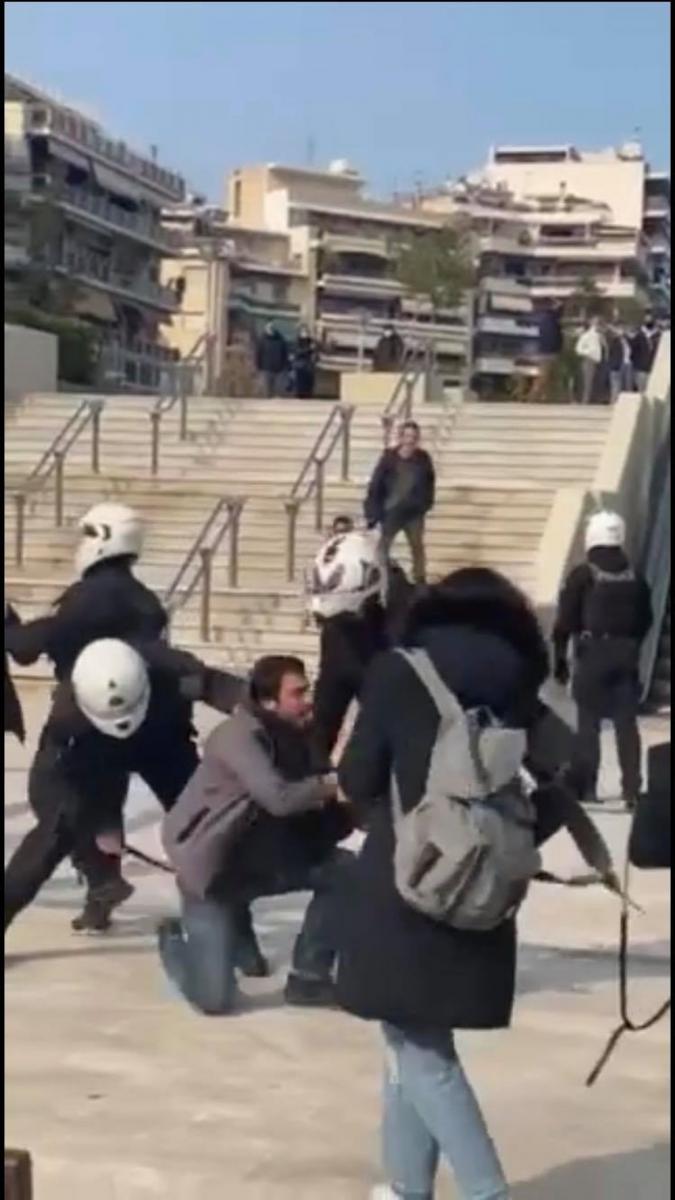 It all started around 3 o’ clock when police approached two families sitting on the benches. They told them to go away and threatened to take them to police station and emergency court if they wouldn’t do so. Some young bystanders protested the police behavior.

Soon more police on motorbikes rushed to the area, started to detain youngsters and even “raided” the park nearby where again families with children and elderly were enjoying the day. 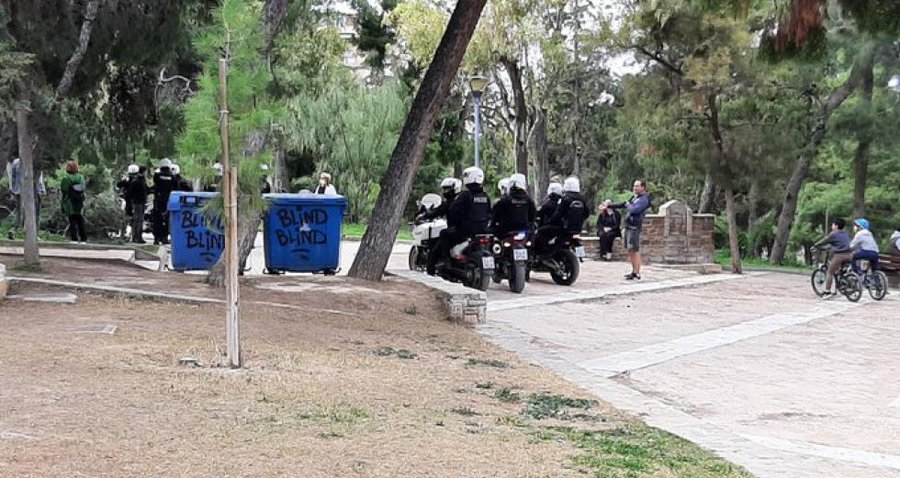 The incidents escalated and police detained some 11 people. 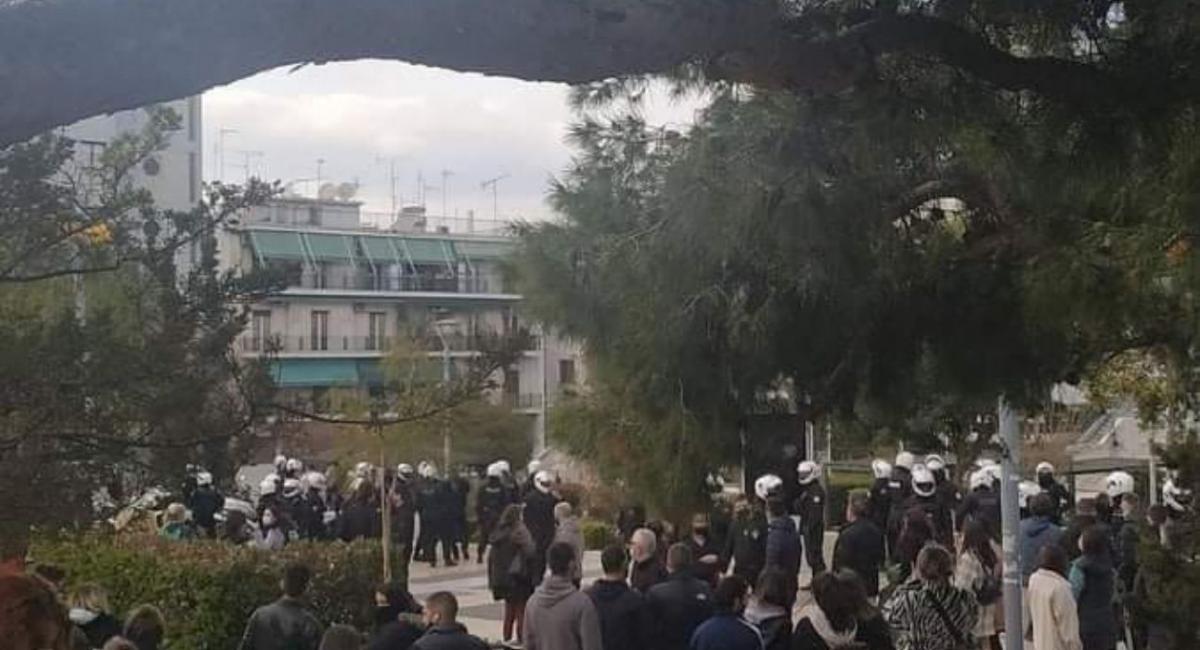 The video showing the police brutality to a citizen in fact talking to police when he is brutally attacked by another officer flooded social media and triggered an outrage.

Speaking to Alpha TV, the two women from the families on the benches said that they were approached by police who told them in a very rude manner that they should go away.

The families, a total of 6 people, had sent sms <6> for personal exercise. Police told them that they are not allowed to sit down but they “should keep walking.”

They women said that they had walked 1.5 km and were taking a rest.

It was then when police who told them to “keep walking” and threatened them to take them to police station and emergency court. The children, both aged 8, got scared and started crying and it was then when the young people intervened.

The two women said that the whole incident was unacceptable and that they will seek the legal way.

Speaking to news24/7 on Monday morning, one of the women said that the officer issued a 300-euros fine for “unnecessary movement” despite the fact that they had had correctly sent sms <6> and were wearing a mask. When she asked “why the fine?” she received the reply “because I want to.”

According to Star TV, locals said that police also urged elderly and families with small children to leave benches and walk away.

Later police fired tear gas and flares among the crowd.

Some 1000 people marched later through the square and to the police station in protest with people in the middle-class suburb clapping in support from their balconies.

Following the outcry on social media and by a part of the mainstream media, police put the blame on “anti-authoritarians” and claimed that they were target of an organized attack by “30 people who came out of a place,” (that was probably closed as all cafes etc are closed due to lockdown.)

One policeman was slightly injured in the hand when he was trying to “rescue the fines book.” The officers were called to the area after a complaint for people crowding in the square.

Late on Sunday, the Greek Police ordered an internal investigation on the issue.

Residents of Nea Smyrni told media that “crowding” is inevitable in the open square and the park as they are not allowed to leave the municipality with a vehicle since the tougher lockdown was imposed since Thursday.

It is not the first time I hear that police urges citizens to “keep walking” when they see people taking a rest on a bench. It was two week ago, when two elderly women were threaten with a 300-euro fine each if they wouldn’t immediately leave the bench. The women had walked some 500 meters away from their homes and were taking a short rest before return.

PS what is interesting is that many mainstream websites took down their original articles on the brutal incident in Nea Smyrni in which they had adopted the official police statement with the title “30 people attacked police” or that “police was attacked during lockdown checks.”