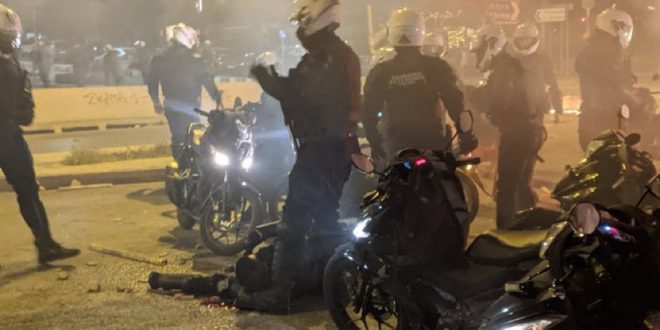 One policeman was seriously injured on the head and another two suffered slight injuries when riot police clashed with angry protesters in Nea Smyrni suburb of south Athens on Tuesday evening. The rally against police violence started from the  main square and thousands marched to the local police station.

According to media reports, it was a big group of protesters who started to hurl molotov cocktail bombs hey hurled petrol bombs, flares and stones against the police, who returned with tear gas, flash bangs and a water cannon to repel the attack. Dozens of riot police on motorcycles rushed to the area. 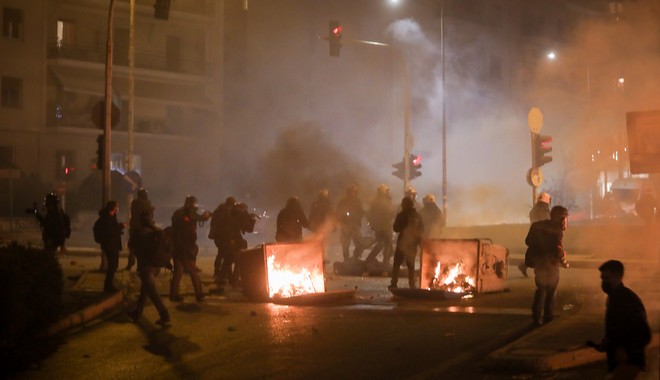 Under unknown circumstances, some police motorcycles were trapped among protesters and a crowd in rage attacked one of them.

A piece of marble or big stone reportedly hit the officer on the head and threw him down, and the mob started punching, beating and kicking the man while on the ground.

Ultimately, the officer was transferred to one of the military hospitals in Athens where doctors said that he was injured on the head thus his life was not at risk. His slightly injured colleagues were also transferred in the same hospital. Later, the Deputy Minister for Citizen Protection visited them.

Over 5,000 people, union members, left-wing supporters, students and residents gathered to protest the police violence on Sunday where officers brutally beat a citizen during routine lockdown checks in the main square, in front of families and children and elderly enjoying the day in the peaceful middle-class suburb.

the rally’s main slogan was: “Parks are for laughter not for being hurt.”

Prior to the rally, police had released pictures of individuals carrying bars of concrete and photographs depicting large bags with water bottles filled with petrol confiscated by the police.

After the policeman’s injury the situation calmed down for some time.

While, the majority of protesters left the area, some groups returned to the main square and police proceeded to detentions.

In the video below, police attacked a young woman just 5m away from journalists covering the detention of another person.

On social media and websites there are reports that also protesters were beaten and injured by police. 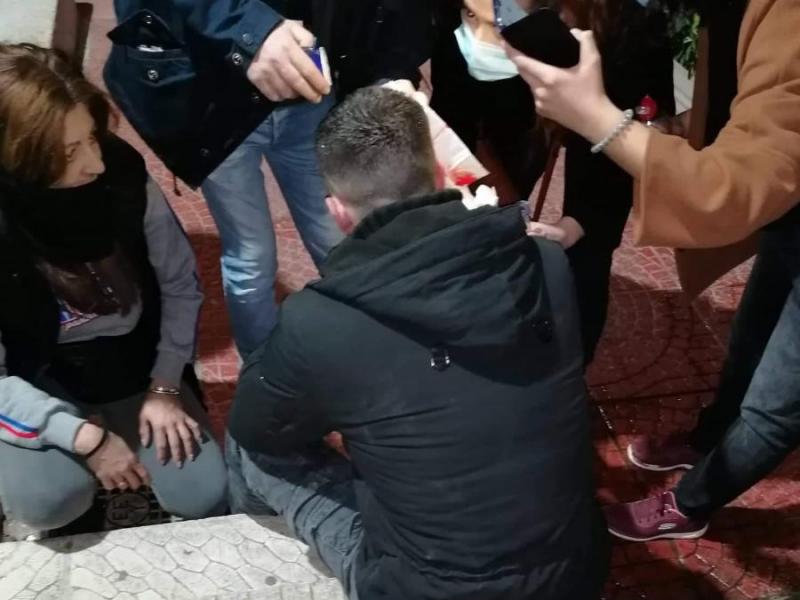 Some reporter was screaming live on Alpha TV that they were attacked with flares by police.

Prime Minister Kyriakos Mitsotakis issued a video statement in which he called for “unity.” The oxymoron of the message is that he also accused the opposition for the ugly incidents.

“The sad images everyone saw tonight in Athens must be the last such ones. The threatened life of a young policeman should also awaken us.I particularly address myself to our young people, who are meant to create, not to destroy. Blind fury leads nowhere,” Mitsotakis said.

Then he accused “some people of trying to sow hate and division “to cover up their own dead end, as they have done in the past.” He reiterated an electoral night commitment in July 2019 that he would guarantee the unity, security and prosperity of all Greeks. “I will allow no one to divide us. We will not let anyone turn us back,” he stressed.

Opposition parties condemned the injury of a policeman and underlined the peaceful nature of the demonstration.