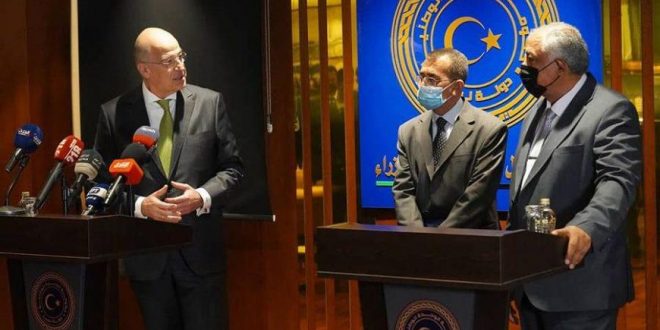 During his visit to Libya, Foreign Minister Nikos Dendias raised the issue of maritime border demarcation saying that the memorandum signed between Turkey and the previous Libyan government was “illegal.” He implied that the two countries may proceed with delineation of mutual maritime borders in the Mediterranean Sea. And he also urged for the withdrawal of foreign armed forces and mercenaries.

“’Greece has always argued that the solution to the Libya problem must come with the immediate withdrawal of all foreign military forces and foreign mercenaries from the territory of Libya.  This must happen immediately, and the Libyan people must be responsible for the country’s future.,” Dendias said after a meeting with Deputy Prime Minister Hussein Atiya Abdul Hafeez Al Qatrani

He expressed Greece’s full support for the transitional Libyan government and the election process set to take place in December.

Regarding the significant issue of the memorandum agreement, Dendias said:

He added that “Greece is at Libya’s disposal for us to reach an agreement on our maritime zones. As you very rightly said, we came very close to reaching such an agreement in 2010. Only a very few details remained to be worked out to complete that agreement.”

Dendias said that “we are here to activate the whole framework of agreements with Libya and to conclude new agreements, in order to assist in any way we can with the country’s reconstruction.”

The FM met with several officials to assure them of Greek support to the provisional Libyan government and underlined: Greece “is back” in Libya.

It was the second visit of Dendias to Libya in less than ten days, after he accompanied there Prime Minister Kyriakos Mitsotakis.

Athens not only tries to limit Turkey’s influence in Libya but also to have the maritime borders agreement canceled.

And while Greek and Libyan officials were exchanging their vows for future cooperation in Tripolis and Benghazi, half of the Libyan cabinet and the Prime Minister were renewing their commitment to the maritime agreement in Ankara. 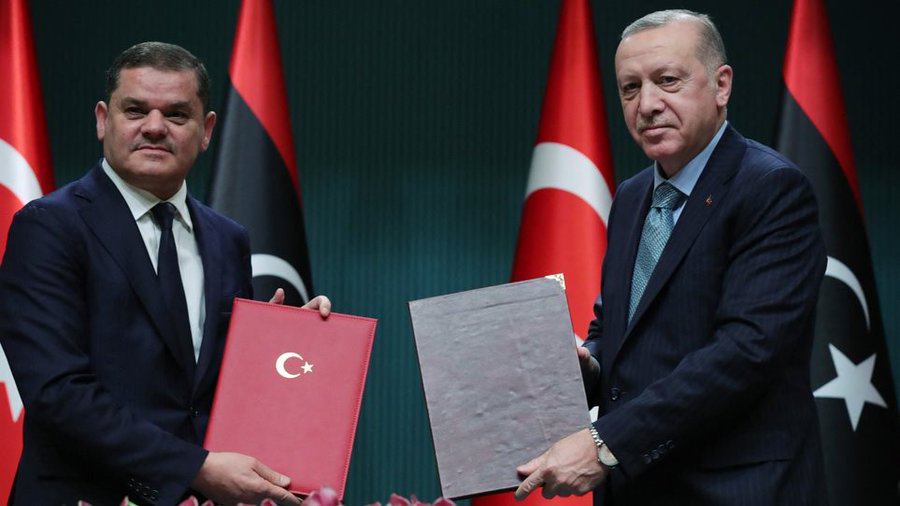 President Recep Tayyip Erdogan said on Monday that Turkey and Libya were committed to a 2019 maritime demarcation accord in the Eastern Mediterranean, after meeting Libya’s Prime Minister Abdulhamid Dbeibeh in

“The maritime accord signed between Turkey and Libya secures national interests and future of both countries…We confirmed our determination on this issue today,” Erdogan said during a press conference.

On his part, Dbeibeh said agreements between the two countries, including the maritime demarcation agreement, are based on a valid framework.

The minister also traveled to Benghazi where he met with representatives of the Greek community and participated in the opening of the Greek consulate there.

“Greece is back to help as much as it can. With our people, with our identity as a European Union member, and we hope to maintain our friendship with Libya and help Libya move forward and become a prosperous and stable country,” he said to a gathering of Greeks in Benghazi.