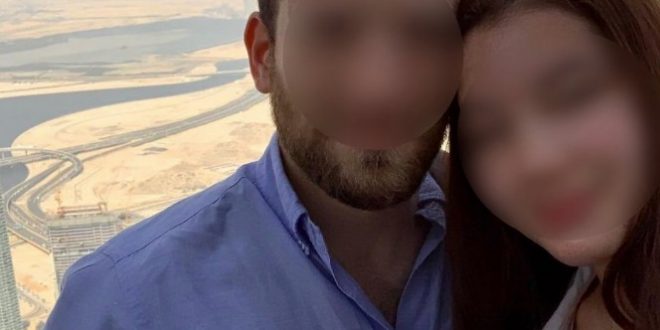 In a extraordinary development, Greek police brought the husband of murdered British-born young mother Caroline Crouch from the island of Alosinos to police headquarters in Athens on Thursday.

The husband, a commercial aviation pilot, was flown to Athens with a helicopter to provide additional information in the case that appeared to be a murder during a robbery in the family’s home in Glyka Nera settlement in eastern Attica last month.

Police sources told media that “new evidence” had derived from the investigation into the homicide.

According to state broadcaster ERT the “motive was not robbery.”

20-year-old Caroline Crouch, a UK citizen, was asphyxiated to death, her 32-year-old husband was bound and gagged near by. The “perpetrators” had also killed and hanged the family dog, a Husky, from the staircase of the two-storey home, a Husky, in a very brutal way. The family’s child, an 11-month-old daughter was found next to her mother’s body, alive and without injuries.

The husband had told police that he tipped emergency call to police tipping the number on his mobile with his nose. Previously, he had called a neighbor.

He had told police that it was a burglary and that he had told the perpetrators where some 10,000 euros were hidden.

Authorities began a massive manhunt and investigation for three suspects, based on testimony provided by the victim’s husband, who was the only witness.

Citing police sources, media report that Caroline’s biometric watch – mobile phone she was wearing on her hand is the one that has given new information to authorities. The watch had recorded pulse in the time, where according to the husband she was dead.

At the center of police investigation are also some findings regarding the removal of the memory card of the surveillance camera at home.

The husband’s mobile reportedly showed some ‘activity’ at the time he was supposed to be tied up.

The pilot had told police that the perpetrators remained inside the house for a long time in the early hours on May 11th. According to Greek Police, however, they did not leave any trace, nor did they take the couple’s mobile phones.

Αnother person from the couple’s environment has also been called in to testify.

“The police are no longer convinced of the existence of robbers in the house.” notes cnngreece.

On Thursday, the husband was on the island of Alonissos, where Caroline spent most of her young life, to attend the 40-day memorial service. He was taken to Athens before the religious service.

Αuthorities are believed to be very close to solving the brutal murder of 20-year-old woman.

Short before 6 o’ clock in the afternoon, Greek Police held a Breaking News statement on TV in which it spoke of “new evidence.”

Police added that they had respected the husband’s wish to attend Caroline’s memorial earlier today – and not take him for additional testimony a day earlier.

PS the public that has been putting pressure on police to solve the heinous crime has meanwhile formed its own opinion and express it on social media.