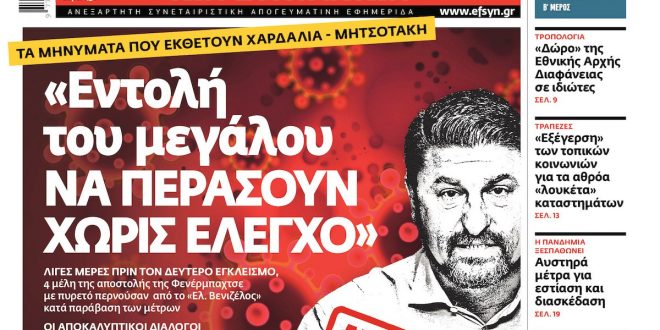 Daily Efimerida Ton Syntakton alleged on Wednesday that by order of the head of Civil Protection members of a Turkish basketball team were allowed in the country without obligatory quarantine although they had symptoms of Covid-19.

In the published text messages between officials at the Athens airport, it is further revealed that the officials used so-called “Pakistani phones.” These are burner phones, unregistered SIM cards Pakistanis sell for 5 euros in Athens and elsewhere and cannot be traced to a person.

According to EfSyn newspaper, on 22. October 2020, that is two weeks before the second lockdown was imposed in the country and whilst arrivals were strictly controlled, the team of Fenerbahce arrived at the Athens International Airport. Among the VIPs were four players with fever.

Fenerbahce was in Athens for a game against Panathinaikos for the Euroleague. Few days later, two cases of Covid-19 were reportedly confirmed among the PAO players.

According to the text messages published by the newspaper, the dialogue between a Civil Protection officer in charge at the Athens airport and the head of the fire service at the airport is astounding. The CiPr officer is informed via SMS by one of his officers that visiting basketball team Fenerbahce includes 4 people with a fever.

“Four people of Fener have  fever”

“It’s an order by Hardalias, get on with it [and keep it] on the Pakistani phone.”

The officer in charge orders the team through, despite the misgivings of the Control officer, a fire fighter:
Cpmmander: “Let the VIP through to Arrivals”
Firefighter: “Let’s not get in trouble, Commander, the EKAV [ambulance service] is here too.”
Commander:“We’re not gonna get in trouble -others burned 100 people* & got promoted” [*reference to Fire Service officials during the Mati fire disaster]

However, based on these alleged messages, the situation is worse as the commander orders the firefighter to keep texting on Pakistani phone  “confirming that the interlocutors know that they are exceeding their duties,” noted daily EfSyn.
Early Wednesday afternoon, head of Civil Protection and Deputy Minister for Crisis Management Nikos Hardalias issued a statement denying any knowledge of and involvement in these events. He also announced that he is pursuing legal action against the journalist and the newspaper.
Hardalias denounced the report as libel and filed a lawsuit in response, while also filing a report with prosecuting authorities for an investigation into the allegations made, so that the reporter and the newspaper’s editors will be required to present any evidence they have for their assertions and so that any other parties involved may be held to account, state-run news agency amna reported later.
He noted that the team had arrived in October 2020 on a special charter flight and had undergone all the required checks for entry into Greece, in accordance with Euroleague and FIBA protocols, while these did not include a temperature check.

The only involvement of the civil protection service, he added, was to make an exception and allow the flight from Turkey at a time when all flights from that country were banned, which was given in line with Euroleague and FIBA obligations and protocols, Hardalias added.