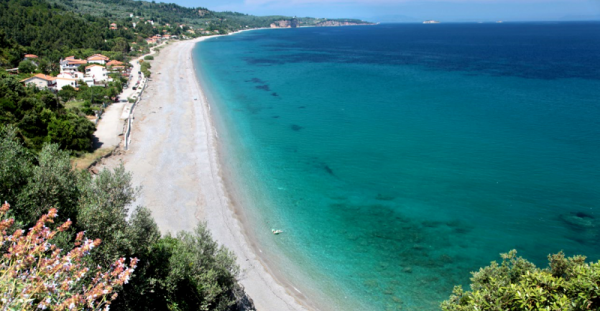 The area already devastated by the wildfires in Northern Evia is estimated at 505 square kilometers, media report on Wednesday on the 9th day of the fires that still rekindle. Forest and agricultural land was destroyed, some 140,000 farming animals – so the mayor of Istiea – and so far unknown number of beehives were destroyed as well as unknown number of wildlife.

➡️a minimum of ~50,000 ha have burnt (smoke prevents photo-interpretation in some areas)#EUSpace is mobilised 24/7 to support #Greece pic.twitter.com/NRt6qJj9EV

The fires destroyed the rich area that fed thousands of people with its fruits is no more and will need years, decades to recover.

Pine tress but also citrus trees, olives, pine, oaks, chestnut trees and many others are no more. Gone are also crops of grapes and vegetables and livestock that would give dairy products. 20% of the Greek honey was produced in the North Evia. Destroyed is also the old as the trees practice of resin tapping of the Aleppo pines of North Evia, leaving hundred of families without income. Note that the devastating forest fires in Ilia, south Peloponnese, in 2007 completely excluded the area from the resin production once for all.

Main source of Evia’s economy relied on the traditional summer tourism along the sea shore and agriculture.

And here comes the Greek government jumping in with innovative ideas: Tourism is the answer to the destroyed agriculture to secure income sources for the locals.

A special tourism development and promotional plan is being prepared for the fire-stricken areas in Greece, an announcement by the Greek Tourism Ministry said on Tuesday. According to Minister Haris Theohais, the plan will focus mainly on Northern Evia – the area that has been ravaged the most – but also include the areas of Ancient Olympia, Ilia and East Mani, and will be in addition to relief package announced by the government.

Theoharis said the plan includes actions adding up to some 1 million euros as well as a special promotional campaign for Evia that will exceed 1.5 million euros. The island will also receive special promotion in all the exhibitions and trade shows that the Greek National Tourism Organization (GNTO) will participate in, at no cost.

Deputy Tourism Minister Sofia Zacharaki added that regeneration plans in Evia include also the establishment of an IEK vocational training institute for tourism professions, a subsidized training program for tourism enterprises and the organization of a day event that will focus on ways to develop special forms of tourism on the island. – via gtp

PS  Why do we need agriculture when we have tourists? * rolling eyes*