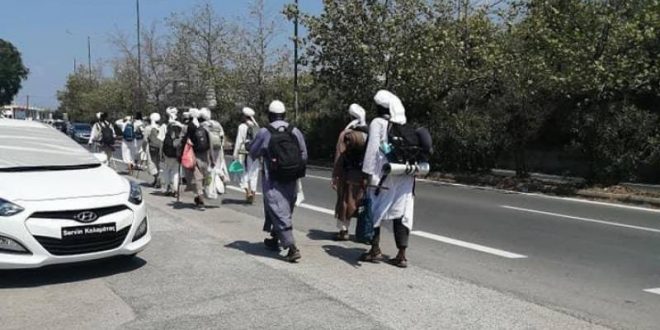 An incredible incident took place in Kalamata when a group of 13 Muslim tourists dressed in traditional costumes were touring the city in southern Peloponnese. They were detained following Islamophobic posts on social media claiming that Taliban had come to the city or that there was a secret plan for the settlement of Afghan refugees.

Thirteen European citizens, who are Muslims by religion and were touring Kalamata wearing their traditional costumes, were brought to the Police headquarter on Thursday. Aim of the detention was the verification of their identities as there were rumors in the city of Afghan refugees or even Taliban..

The Muslim tourists are reportedly German and French citizens.

After the verification and the authenticity of their travel documents was checked and confirmed, the certainly stunned tourists were released

Local newspaper eleftheriaonline that has the exclusive story, reported of “a wave of of Islamophobia on social media from users who took pictures of the group and uploaded photos speaking of “Taliban in Kalamata,”

The most “extremists” among those Greek social media users even linked the presence of the group to a “secret plant to settle Afghan refugees in the city,” the newspaper noted.

According to some posts on social media, the group had first visited the island of Lesvos and it was there where locals started the campaign against them with pictures and videos.