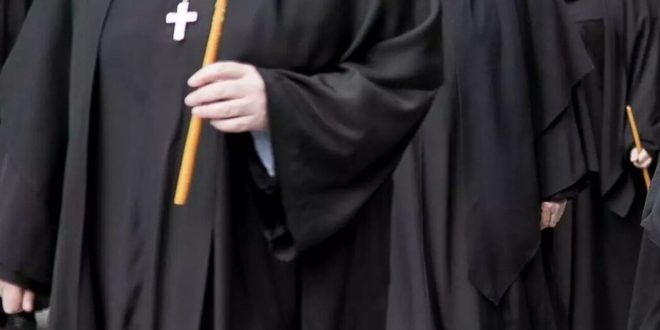 Three nuns of fraternity in Thessaloniki die of Covid-19; most convent nuns unvaccinated

Three members of a Greek-orthodox fraternity in Thessaloniki have died of coronavirus and a fourth one is in Intensive Care Units. Majority of the 17 nuns are unvaccinated against the Covid-19 and refuse to cooperate with the health authorities. Several nuns in neighboring monastery are also infected with the virus.

Health authorities are concerned about the widespread infections in the convent located in eastern Thessaloniki, northern Greece, in the the outskirts of Thermi Municipality, media report on Friday.

Only 6 of 17 in total nuns are vaccinated, local media voria report, adding that the victims and the infected are among the 11 unvaccinated ones.

One nun currently in ICU is reportedly in serious condition.

Those n charge of the convent keep silence over the real conditions of the infected.

According to some leaks to the press, one nun who is only slightly sick takes care of those in more serious condition.

Others claimed to Mega TV,  that the 63-year-old was sick over some 18 days, then she recovered over a period of four days and suddenly died on Thursday.

Other sources said that one of the nuns is a doctor and takes care of the sick women.

The entrance to monastery has been closed to all visitors since Friday morning, allegedly by order of the convent.

According to reports, the nuns refuse to cooperate with the National Health Organization EODY and the Civil Protection despite the fact that there several infected nuns.

“The nuns not only refused to receive vaccination but also to visit a health care facility for their treatment,” local media report.

The Christian fraternities are not obliged to the jurisdiction of the Metropolis of the area but they are reportedly independent bodies.

The fraternity is housed in a monastery of Plagiari, which borders with Epanomi municipality where there is concern of a large outbreak due to movement of unvaccinated citizens between the two municipalities.

Local media ThessToday reports that there is a “dramatic increase of infections in Epanomi”due to the daily movement of citizens and their participation in activities and services of the fraternity.

Characteristic is the statement by Pulmonology Professor Nikos Tzanakakis who said that the approximately 1,000 monasteries in Greece as against Covid-vaccination.

Epidemiologist Marios Lazanas said just two days ago that specially the monasteries in northern Greece are a problem due to their refusal to get a shot but also due to the influence they have in local communities..

“People are influenced by the priests. They tell them that the vaccine contains elements from the Satan,” Lazanas stressed.

It’s certainly not a coincidence that the majority of regional units marked “red” on the updated Covid-MAP are in northern Greece.