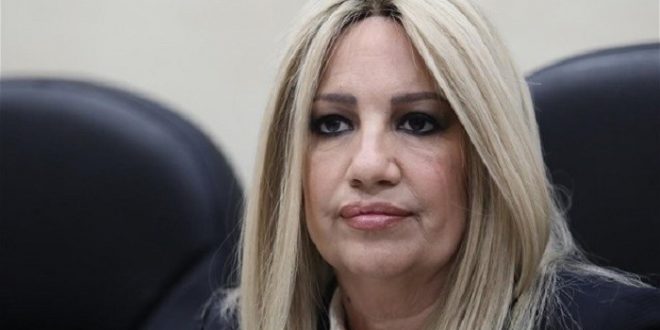 Leader of KINAL, Fofi Gennimata, withdraws from leadership race due to health reasons

October 12, 2021 Greece, Politics Comments Off on Leader of KINAL, Fofi Gennimata, withdraws from leadership race due to health reasons 1,444 Views

Fofi Gennimata, the leader of socialist opposition party Movement for Change (KINAL/PASOK) announced on Tuesday afternoon that she will not run in upcoming party elections for leadership due to health reasons.

Gennimata announced her withdrawal from the leadership race on a tweet in which she wrote: “The deterioration of my health that requires hospitalization and treatment does not allow me to run as candidate for the leadership of KINAL.”

Genimmata “was admitted to Evangelismos hospital on Monday night with ileus* symptoms, the hospital said in a statement. “Examinations revealed that the condition was due to the recurrence of the underlying disease,” the statement added.

The 56-year-old politician and former minister was diagnosed with breast cancer in 2008. The disease stroke again in 2018.

In an interview in 2020, the mother of three had said that she has learned to live with cancer and never let fear and agony to overwhelm her daily life.

Gennimata’s withdrawal have already affected the elections race for the KINAL leadership and may influence also the political path of the country.

Before the incident, elections for the party leadership were expected to take place on December 5. One of the remaining three candidates, Nikos Androulakis, announced short after Gennimata’s announcement that he suspended his candidacy. The other two candidates are former PASOK official and MP Haris Kastanidis and ex Health Minister Andreas Loverdos.

Some Greeks already predict that Loverdos will win the leadership elections and will be more than eager to cooperate in a future government alliance with conservative New Democracy to which he felt affiliated long ago.

In public opinion polls KINAL/PASOK gets an average of 5-5.5 percent.

*ileus is the lack of the normal muscle contractions of the intestines.