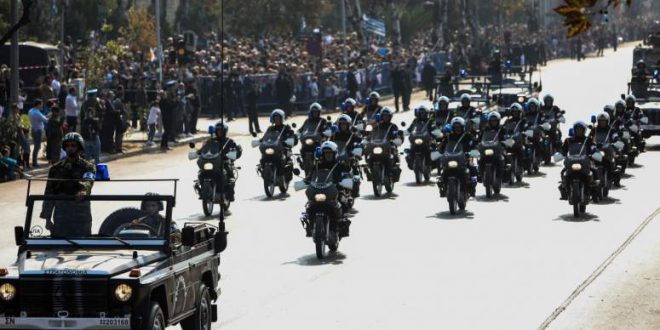 Confusion prevails over the parades in Thessaloniki due to coronavirus outbreak

Chaos and confusion prevailed on Friday, when local authorities in Thessaloniki and the government in Athens disagreed on the traditional students’ and military parades on October 28. the local government has requested the cancellation of the students parade and to limit the military one as coronavirus infections surge and Intensive Care Units in public hospitals in the region have almost reached their capacity.

The Military parade will be held as usual on October 28, the National OCHI Day, with parts of the Greek Armed Forces and strictly for 60 minutes. The Ministry of Interior took this decision following a request by the local authorities in the country’s second biggest city, state broadcaster ERT reported on Friday morning.

Short time later, sources from the Interior Ministry dismissed the news saying that the parades both military and students will be held as usually on the National Day and the day before (students’ parades).

Several health experts spoke against the parades due to the coronavirus outbreak in northern Greece.

But the conservative government seems reluctant to cancel or timely limit the traditional parades in Thessaloniki and anger their also conservative voting basis. Note that also the local authorities are from New Democracy.

At the Live Briefing on Thursday, the health authorities officials recommended the use of mask also outdoors during the parade as bystanders will crowd to watch the spectacle.

Last year, the city of Thessaloniki experienced a surge of infections and a dire situation in the hospitals where Covid-patients died even outside the ICUs after the celebrations of the city’s patron St Demetrius on Oct 26.

Parades on the ground were cancelled last year on Oct 28 due to the pandemic, only the Air force was allowed to show with fighter jets and helicopter. But this year, the government thinks that people should go get the jab as vaccines against Covid-19 are available free of charge.

Furthermore, as the government has said many times: the health experts recommend, we take the final decision.

Α statement by the Interior Ministry was issued short after 1 o’ clock  saying that the students’ parade will be held as usual on Oct 27 and the military parade on Oct 28 will take place only with members of the Armed Forces and without the participation of civilians like students, scouts, war victims etc.

In the end, the reality may force the government to take the right decision, as the city of one-million population has almost as many daily infections  as Athens with four million people.