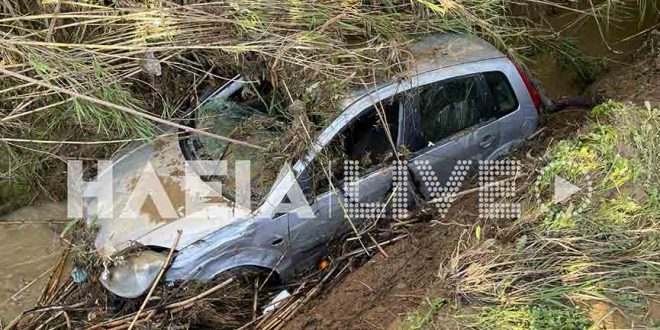 November 26, 2021 Society, Very Mix Comments Off on Elderly man dies in south Peloponnese when his car swept away by rushing rain waters 834 Views

A 65-year-old man was found dead after his car was swept away by the waters of a swollen stream during a rainstorm in Ilia, southern Peloponnese on Friday. His body was found by rescuers some 300 meters away from the vehicle.

According to local news site ilialive, the victim, a retired teacher from the village Lygia Vartholomio, tried to cross the bridge road over a small stream in the neighboring village of Vrana. However, the stream was swollen due to the heavy rainfall, the water volume was big and powerful and the car was swept away and trapped in the narrow part of the stream about 200 meters form the road.

Rescuers transferred body to the morgue, while with heavy machinery municipality teams tried to pull out the vehicle.

The bad weather front hit with torrential rains the prefecture of Ilia on Friday, flooding extensive areas including agricultural land and forcing the closure of the Patras-Pyrgos highway for four hours due to an overflowed river.

Pupils of a school in Vartholomio had to be evacuated with a …tractor as the rainfall flooded the yard and the roads and parents were unable to reach it in order to get their children back home.

According to latest information by ilialive, the river of Vagia is about to overflow and alert has rung to local authorities of Andravida-Kyllini about possible evacuation of residents near the river.