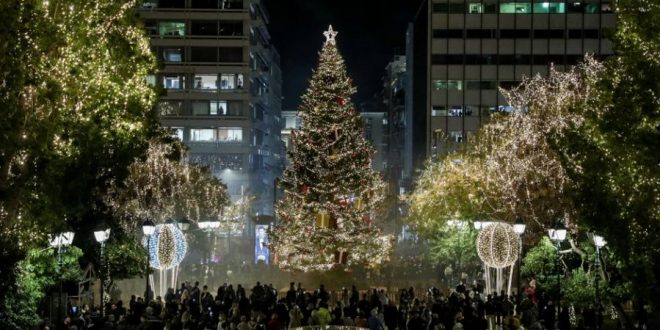 Health Minister Thanos Plevris saod on Wednesday that the government is considering a new “framework of restrictive measures” against Covid-19 after the Christmas and New Year’s holidays.

Speaking at the Plenary of the Parliament Plevris stressed that the Epidemiologists’ Committee that is meeting today will make its recommendations and the government will take the decision.

The Minister added that “in the next ten days there will be as many control checks as there were all through the year.”

Addressing owners of restaurant and entertainment facilities he warned that “no one should think in any field he works, that he will not do the control checks too to secure that only vaccinated people are inside.”

Plevris stated that planned vaccinations have reached 70% and 66% of the population are fully vaccinated.

He added that in the adult population 80% has been administered the first dose and 75% have completed their vaccination..

He called on all citizens to do a “self test” during the holidays so that there is tracking in real time.

Unvaxxinated healthcare staff in the national healthcare system (ESY) will have another three months to reconsider their stance before being their work contracts are terminated, Minister Plevris warned.

Up to now, doctors and nurses in the ESY who refused to get vaccinated against the coronavirus were suspended without pay and given three months to change their minds before being terminated.

Today, the minister clarified that the “mercy time” will be extended for another three months, to March 31, 2022 before they lose their jobs.

PS it looks as if Greek Health Minister Plevris is not aware that also fully vaccinated people can get the virus and thus the Omicron variant.