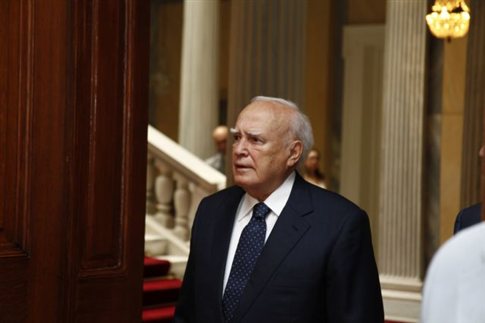 Former President of the Hellenic Republic, Karolos Papoulias, passes away

Former President of the Hellenic Republic Karolos Papoulias passed away at the age of 92 on Sunday. Papoulias served two terms as president, from 2005 to 2015.

He was a longstanding member of PASOK and held various ministerial appointments in his long political career, mainly in the Foreign Ministry and the Defense Ministry.
He also served as MP for his home region of Ioannina, Epirus,for 26 years.
As a foreign minister Karolos Papoulias was very active in improving ties between Greece and the Arab world as well as with Turkey and Egypt.
He held talks with a total of 12 Turkish Foreign Ministers and was firmly committed to the continuous and difficult effort to normalize Greek-Turkish relations. This culminated in the signing of the Papoulias-Yilmaz memorandum in 1988. He supported Turkey’s European aspirations conditional on their respect for international law and European Union values.
The whole political world in Greece and Cyprus has sent condolences to his family and published messages.

“His participation in the National Resistance and his efforts against the Junta defined his journey, reflecting his constant commitment to the ideals of freedom and justice that he consistently defended,” stated current president Katerina Sakellaropoulou on her predecessor. She added that Papoulias “served as President of the Hellenic Republic for two consecutive terms and honoured with his conduct and ethos this highest state institution, vigorously defending social cohesion and national unity.”