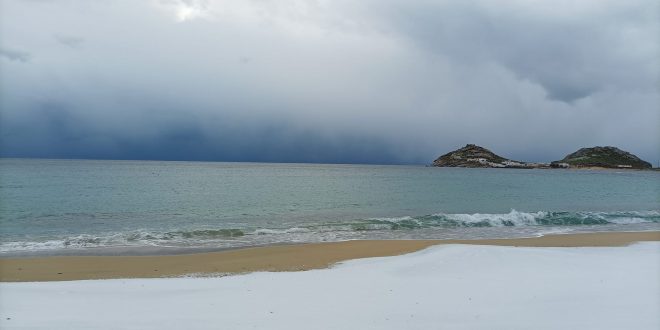 A not so often phenomenon on the Cyclades islands in the central Aegean Sea: Snow! Famous landscapes on Mykonos, Santorini, Amorgos, Tinos have been covered with a white carpet and the scenery reminds anything but bright sun, endless blue sea and sandy beaches.

Syros, Sifnos and Andros via syrrospress

Thrilled by the phenomenon, locals uploaded pictures on social media or sent them to local media on Sunday morning:

The snow invasion started on Saturday afternoon and continued all night. Next to the fairy tale scenery there are also some real life problems as the islands are not used to such phenomena, main roads are closed to traffic and some villages have been reportedly cut from the outside world.

On some of the Cyclades islands schools will be closed on Monday and Tuesday.

Greece’s meteorologists warn that the second wave of snow weather front ELPIS is forecast to strike again from Sunday evening and snow is expected also in the south suburb of Athens.

The snow and cold snap weather is forecast to last until Wednesday, January 26, 2022, a slight improvement is expected from Thursday. More details on KTG here.