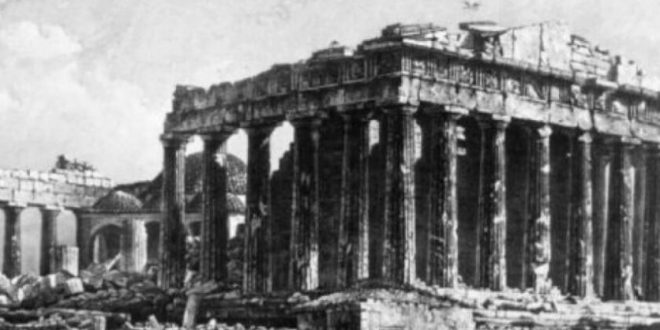 First ever photograph of the Acropolis Parthenon dated 1839

February 7, 2022 Archeology, Culture, FEATURED Comments Off on First ever photograph of the Acropolis Parthenon dated 1839 2,033 Views

The first photograph of the Acropolis includes the ancient temple but also a mosque*.

The second picture of the Acropolis, taken in 1942 by Joseph-Philibert Girault de Prangey, visits Athens and photographs again the Parthenon but not its North-West side which is the one you see entering from the Propylaea like the image of Lotbinière, but the South-East. The mosque has just been removed and the wooden scaffolding of the operation can be seen.

The two photographs were posted on the social media account by Socratis Mavrommatis, Chief photographer for the Greece Ministry of Culture at the Acropolis Restoration Project.

Mavrommatis recalls that back then the Daguerreotypes could not be reproduced due to technological rstrictions, so they were copied as engravings which could then be printed.

The Parthenon picture was copied and engraved by Frédéric Martens to be printed on the album “Excursions Daguerriennes”(1840–41).

The original daguerreotypes of the Parthenon and the Acropolis may well be lost.

In fact, none of Joly’s original plates has been identified, and they may well be lost. What they contained is known through his diary which has been published in 2011.

Source: MONUMENTAL JOURNEY, The Daguerreotypes of Girault de Prangey. Published by: The Metropolitan Museum of Art.

*mosque in the Parthenon: Some time before the close of the fifteenth century, the Parthenon became a mosque. The precise circumstances under which the Turks appropriated it for use as a mosque are unclear; one account states that Mehmed II ordered its conversion as punishment for an Athenian plot against Ottoman rule.

In the final decade of the 6th century AD, the Parthenon was converted into a Christian church dedicated to the Virgin Mary. After the Ottoman conquest, the Parthenon was turned into a mosque in the early 1460s. On 26 September 1687, an Ottoman ammunition dump inside the building was ignited by Venetian bombardment during a siege of the Acropolis. The resulting explosion severely damaged the Parthenon and its sculptures.