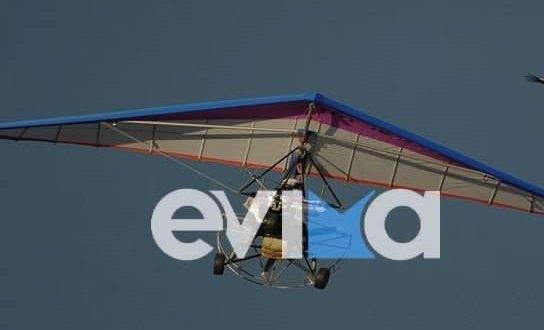 Two Turkish nationals flew a paraglider and landed in Karystos on the island of Evia seeking political asylum. According to an exclusive report by local media evima.gr the paragliding crashed  in the sea area of Bouros early Saturday evening.

Port authorities picked up the two people and transferred them to the general hospital of Karystos.

The two reportedly told authorities that they were Turkish policemen and wanted to apply for political asylum in Greece.

It is not known where they took off for their adventurous path to …freedom as the nearest Turkish coast could be over 250 km away. However, according to paragliding literature, paraglider flights can last many hours and cover hundreds of kilometers.

According to evima.gr, members of the Greek state security were immediately sent to Karystos to meet with the two who are currently held at the port authority premises.

The two men, aged 32 and 33, reportedly told authorities  that they started their trip with the motorized paralaglider from Izmir but they run out of fuel and landed in Karystos. They were wearing life jackets.

When the paraglider crashed in the water  they swam to the shore with the help of two people who were fishing underwater and were picked up by a Coast Guard patrol vehicle.

A case file against them is under way for illegal entry into the country.

They did not have any travel documents with them.