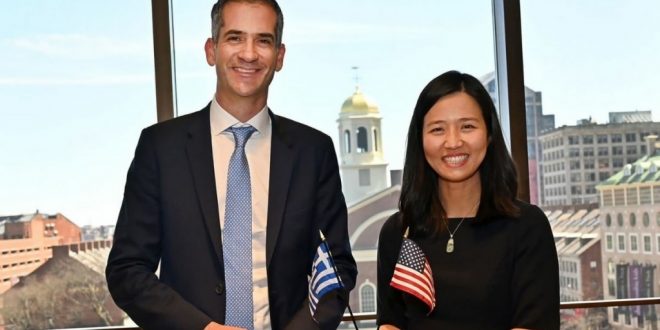 Greek capital Athens and the US city of Boston are to become ‘Sister Cities’ after Athens mayor Kostas Bakoyannis and mayor of Boston Michelle Wu decided over the weekend.

Bakoyannis and Wu agreed on the issue during the official visit of Athens mayor to Boston, where he handed over to the Boston Athletic Association four gold-plated wreaths awarded to the winners of the Boston Marathon.

Four wreaths of gold-plated olive branches were handed over to the Boston Athletic Association by Athens mayor Kostas Bakoyannis during the official opening ceremony of the Boston Marathon on Friday.

The wreaths are prepared in Greece and travel every year to Boston. They will crown the first four winners (women and men) of the 126th Boston Marathon next Monday.

Bakoyannis invited Boston’s mayor to visit Athens in November in order to watch the 39th Authentic Marathon in the Greek capital.

In an announcement, the municipality of Athens underlined that the Sister Cities agreement with Boston includes a series of actions and initiatives for promoting Athens as an ideal tourism destination for Bostonians given that, for the first time in 25 years, there will be a direct flight linking the two cities.